AFTER THE SMART CITY: GLOBAL AMBITIONS AND URBAN POLICYMAKING IN PHILADELPHIA 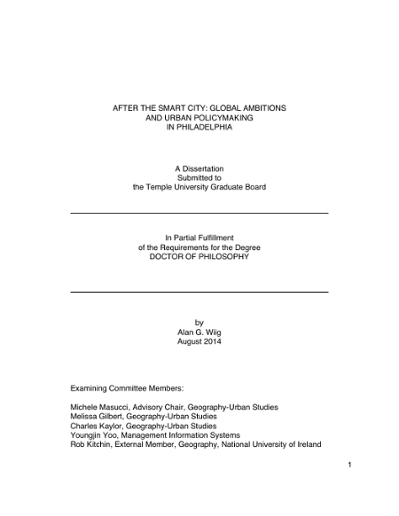 After the Smart City: Global ambitions and urban policymaking in Philadelphia is a study of the relationships between digital information and communication technologies, urban policy initiatives for economic development, and the material, spatial consequences of Philadelphia's shift from an industrial manufacturing city to a node in the globalized economy. The rise of `smart city' policy initiatives signaled a shift in urban governance strategies to use digital, information and communication technologies such as sensors, smartphone applications, and other forms of embedded network equipment, combined with analytic monitoring software, to improve the flow of people, goods, and information through a city. In Philadelphia, the `smart city' acted as a rhetorical device to signal a promising, creative, vibrant, and intelligent city for globally oriented, knowledge and innovation-driven enterprise. The city's primary use of the `smart city' term was to describe a civic-engagement effort to build an online, workforce education application to train low-literacy residents--often living in formerly-industrial, now marginalized neighborhoods--with the skills to compete for entry-level jobs in the globalized economy. Jobs, if they materialized, would likely locate in the premium areas of the globalized economy, continuing the social and economic marginalization of much of the city. The research asks: Did the `smart city' vision and associated programs in Philadelphia, such as Digital On-Ramps, result in a lessening of economic inequality, a key stated goal of the programs and promise of the vision? If not, what alternative impacts resulted from them? This work suggests that one possibility is that the vision and associated programs evolved to form a script that promoted Philadelphia as a global city and ultimately drove a new form of digital and infrastructural inequality grounded in a series of new geographies. The analysis concludes by considering the spatial consequences of the `smart city' discussion, arguing that the `smart city' primarily benefited the already-prominent business districts of the city. This dissertation's findings contribute to literature in critical urban geography by discussing the implications of networked information and communication technologies on policy making and the ways urban policies are enrolled in larger shifts in governance strategies to position cities as relevant and competitive worldwide. The key finding of the dissertation is that rhetoric matters: the rhetorical construction of the `smart city' is closely intertwined with the shaping of the `smart city' through policy, practice and applications. The rhetoric of the smart city acted for economic development, creating a discourse of technological determinism in the actually-existing `smart city'. While much recent scholarship on the `smart city' examines the data, control, and infrastructural change side of the topic, to fully critique the `smart city' necessitates examining both sides which work differently despite using the same descriptive language. This division served to shift attention and resources away from addressing the actual inequality--of failing schools and a lack of skills relevant to employers--towards solving problems through an unproven online and smartphone application-platform. In Philadelphia, which serves as the contextual focus of this dissertation, the resources were deployed on basis of a technocratic ideology that masks inequality behind a curtain of perceived need, which shifted the policy discussion away from affecting widespread, formative change and toward technological solutions.