ICHNOLOGY OF THE MARINE K-PG INTERVAL: ENDOBENTHIC RESPONSE TO A LARGE-SCALE ENVIRONMENTAL DISTURBANCE 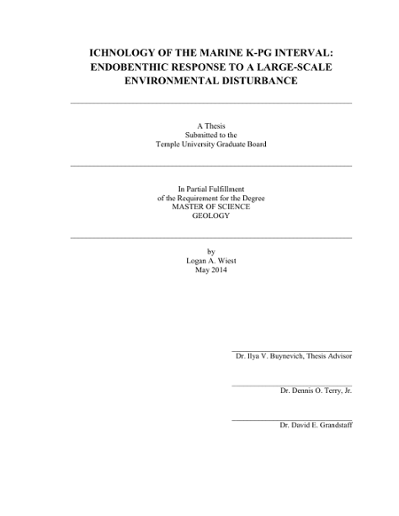 Most major Phanerozoic mass extinctions induced permanent or transient changes in ecological and anatomical characteristics of surviving benthic communities. Many infaunal marine organisms produced distinct suites of biogenic structures in a variety of depositional settings, thereby leaving an ichnological record preceding and following each extinction. This study documents a decrease in burrow size in Thalassinoides-dominated ichnoassemblages across the Cretaceous-Paleogene (K-Pg) boundary in shallow-marine sections along the Atlantic Coastal Plain (Walnridge Farm, Rancocas Creek, and Inversand Quarry, New Jersey) and the Gulf Coastal Plain (Braggs, Alabama and Brazos River and Cottonmouth Creek, Texas). At New Jersey sites, within a regionally extensive ichnoassemblage, Thalassinoides ichnospecies (isp.) burrow diameters (DTh) decrease abruptly by 26-29% (mean K=15.2 mm, mean Pg=11.2 mm; n=1767) at the base of the Main Fossiliferous Layer (MFL) or laterally equivalent horizons. The MFL has been previously interpreted as the K-Pg boundary based on last occurrence of Cretaceous marine reptiles, birds, and ammonites, as well as iridium anomalies and associated shocked quartz. Across the same event boundary at Braggs, Alabama, DTh of simple maze Thalassinoides structures from recurring depositional facies decrease sharply by 22% (mean K=13.1 mm, mean Pg=10.2 mm; n=26). Similarly, at the Cottonmouth Creek site, Texas, Thalassinoides isp. occurring above the previously reported negative £_13C shift and the first occurrence of Danian planktonic foraminifera are 17% smaller in diameter (mean K=21.5 mm, mean Pg=17.9 mm; n=53) than those excavated and filled prior to deposition of a cross-bedded, ejecta-bearing sandstone complex commonly interpreted as the Chicxulub ¡¥event deposit¡¦. At both of these impact-proximal regions, the Cretaceous and Paleogene burrows were preserved in similar lithologies, suggesting that a reduction in size cannot be attributed to sedimentological factors. At all localities, up-section trends in DTh are statistically significant (fÑfnf¬0.05; non-parametric Kruskal-Wallis test). Using the burrow diameter as a proxy for tracemaker body size, a reduction in DTh above the K-Pg boundary likely reflects dwarfing within the post-extinction community of decapod crustaceans. Dwarfing during the early recovery stages of the end-Cretaceous mass extinction, as recorded by ichnofossils, occurred within glauconite-producing (New Jersey), carbonate (Alabama), and siliciclastic (Texas) depositional environments and appears to be widespread. Because this ichnological signal appears to be a general phenomenon across the crisis interval, trace-fossil analysis provides a potential in-situ field method for constraining and correlating the stratigraphic position of the K-Pg and other extinction events, particularly in the absence of other macroscopic, microscopic, and geochemical indicators. Whereas overprinting of the original marine ichnofabric by morphologically similar continental traces is not a concern in lithified sections of Alabama and Texas, such an occurrence must be considered within unconsolidated sections. Within the Hornerstown Formation of New Jersey, a pervasive Thalassinoides framework contains traces of burrowing bees and wasps. Due to their penetration of up to 1 m, excavations just beyond the weathering front are insufficient for exposing the original marine ichnofabric. Insect burrow diameters (7-25 mm) are within the range of Thalassinoides traces (4-31 mm), exhibit occasional branching, and lack of ornamentation (bioglyphs) on the burrow walls. Therefore neither size nor gross morphology are adequate for distinguishing these widely diachronous and unrelated ichnites, especially when the insect burrows have been filled. However, the presence of backfill menisci and a beige clay halo help distinguish the ancient marine burrows, whereas highly oxidized fill and the occurrence of a terminal brooding chamber are diagnostic of modern insect burrows.