Co-Constructing Music in a Reggio-Inspired Preschool 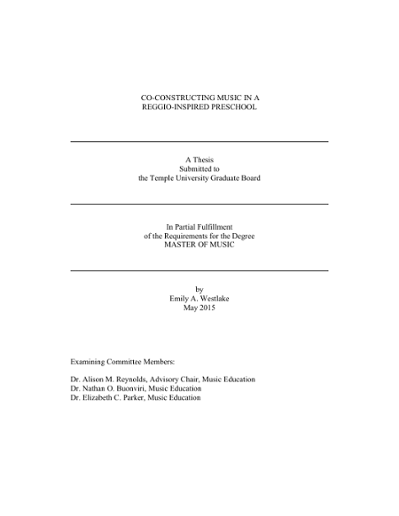 The purpose of this qualitative research was to understand the process of co-constructing music in a Reggio-inspired preschool. Although both adults and children facilitate musical processes in co-constructed settings, in this study I focused on processes that emerged from children. One question guided this study: In this preschool, what processes do children use to make their music learning visible and audible? From September 16 to December 16, 2014, I visited Project P.L.A.Y. School--a play- and relationship-based, Reggio-inspired preschool--once weekly for one and a half hours during the children's free play time. The participants were 13 children between the ages of two and a half and five years old, as well as six adults. During my visits, I acted as a musical play partner with the children, following the children's leads. Data emerged from child and adult musickers as musical interactions, which I documented using Reggio-inspired documentation techniques--audio recording, video recording, and photographing during musical interactions as long as the interaction lasted. In addition, I kept a researcher's journal consisting of same-day reflections after each visit. The documentation resulted in five hours and 42 minutes of video and audio recordings, 115 photographs, and an 80 page researcher's journal. Because my data collection were modeled on Reggio-inspired documentation techniques, I did not run continuous video but only recorded during musical interactions as long as the interaction lasted. Thus, the audio and video recordings were in 215 separate files, ranging from four seconds to 19 minutes in duration. I interpreted the data using qualitative strategies, coding data from documentation and my journal. Codes gave rise to categories which became salient themes. I labeled those themes processes, and employed narrative tenets to present the findings, restorying experiences into vignettes and using photographs and notation to support the themes. At Project P.L.A.Y. School, children made their music learning audible and visible by engaging in seven music processes: vocal exploration, singing, instrument exploration, expressive movement, notation exploration, staging shows, and musical conversations. These processes emerged as part of larger social processes, such as discussion and social play. Some processes emerged within others, as children sang during their musical conversations and danced while they staged shows. Thus, co-constructed musicking was part of the whole experiences of the children. Musickers at Project P.L.A.Y. School made their learning audible and visible through musical processes that were fundamentally social and creative. The co-constructed musicking was social and creative, as adults and children developed musical thinking and skills through listening and responding to one another. Through the emergent social and musical process, adults were able to scaffold and extend children's musicking. Through these processes, musickers developed skills that may help them become thoughtful, independent, and intentional musicians. Due to the rich musicking that emerged in this context, I recommend that music teachers and early childhood teachers embrace the role of musical play partner; dedicate time to music exploration and play; design children's musicking spaces in a way that emphasizes agency and accessibility; and provide opportunities for musical choice in all music education settings. I conclude by recommending that future researchers consider studying co-constructed musicking in other environments, as well as musical project work, as projects are important to the emergent curriculum of the Reggio approach.