Twitter as a tool for and object of political and electoral activity: Considering electoral context and variance among actors 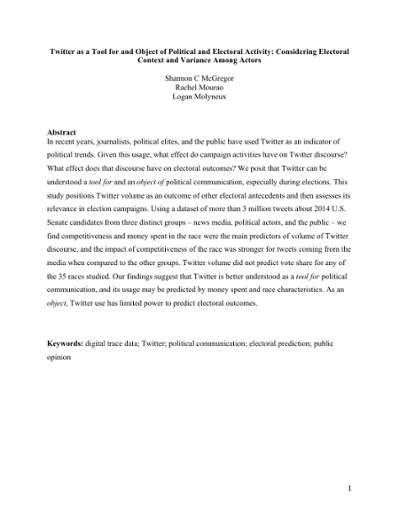 In recent years, journalists, political elites, and the public have used Twitter as an indicator of political trends. Given this usage, what effect do campaign activities have on Twitter discourse? What effect does that discourse have on electoral outcomes? We posit that Twitter can be understood as a tool for and an object of political communication, especially during elections. This study positions Twitter volume as an outcome of other electoral antecedents and then assesses its relevance in election campaigns. Using a data set of more than 3 million tweets about 2014 U.S. Senate candidates from three distinct groups—news media, political actors, and the public—we find that competitiveness and money spent in the race were the main predictors of volume of Twitter discourse, and the impact of competitiveness of the race was stronger for tweets coming from the media when compared to the other groups. Twitter volume did not predict vote share for any of the 35 races studied. Our findings suggest that Twitter is better understood as a tool for political communication, and its usage may be predicted by money spent and race characteristics. As an object, Twitter use has limited power to predict electoral outcomes.