Designing for Change: How a School Counselor Formed and Facilitated a Teacher Work Group Focused on Promoting Desirable Teacher-Student Relationships 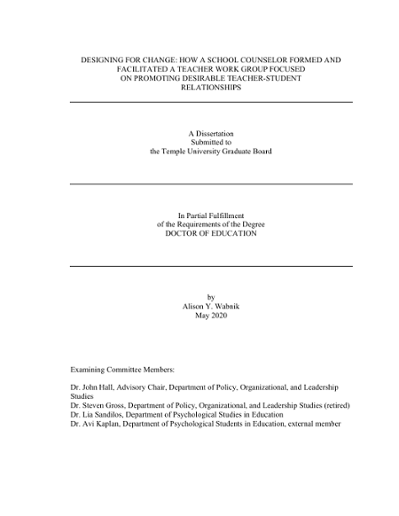 Educational leaders play a critical role in creating change in schools (Fullan, 2001; Reeves, 2009; Sheninger & Murray, 2017; Ziegler & Ramage, 2017). Increasingly, school counselors are being asked to take on leadership roles during a time of educational reform (Amatea & Clark, 2005; Baker, Robichaud, Westforth Dietrich, Wells, & Schreck, 2009; House & Hayes, 2002; Lewis & Borunda, 2006; McMahon, Mason, & Paisley, 2009; Shields, Dollarhide, & Young, 2018; Young, Dollarhide, & Baughman, 2015). The research on school counselors leading collaborative change efforts is very limited, and the behaviors and characteristics of counselors that influence the formation and facilitation of teacher teams have not been studied. Using a design-based methodology, this study examined how a school counselor organized and implemented an effective work group that aimed to support the formation of desirable teacher-student relationships. The focus of the study was on the planning process that was implemented by myself, the school counselor, not the outcome of the process. The qualitative data that was collected during the process describes the structures and processes involved with the initial planning stages, formation, and functioning of the work group. The data captured the importance that relationships, empathy, planning, and reflection all had on the formation, facilitation, and group processes. Lastly, six design principles were developed for school counselors to use as practitioners when forming and facilitating teacher work groups.