The Contributions of miR-155 in Obesity, Metabolic Syndrome, and Atherosclerosis Development 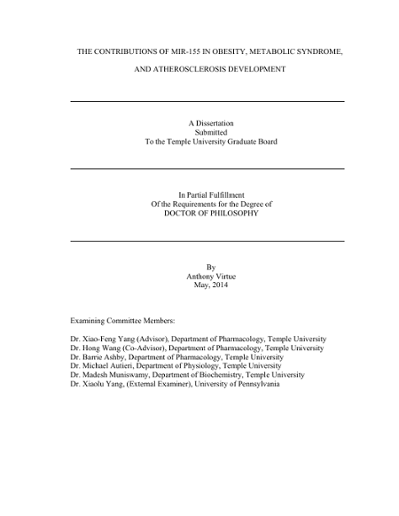 The global incidence of overweight and obese individuals has skyrocketed in the past few decades resulting in a new health epidemic. In 1980, 5% of males and 8% of females were categorized as obese; by 2008 these values doubled equating to half a billion adults worldwide. This surge of overweight and obese individuals has driven a dramatic increase in people afflicted with metabolic disorders. As such, the term "metabolic syndrome" (MetS) has been coined to describe several interrelated metabolic risk factors which often present in concert. Specifically, metabolic syndrome refers to the presence of at least three of the following five conditions: central obesity, elevated triglycerides, diminished high density lipoprotein (HDL) cholesterol, hypertension, and insulin resistance (IR). MetS is a major health concern due to its ability to increase the likelihood of cardiovascular disease (CVD), diabetes, and other life-threatening ailments. In light of this growing medical epidemic, we have concentrated our efforts in evaluating the role of microRNA-155 (miR-155) in MetS development. MicroRNAs are a newly defined class of small, non-coding RNA which contain the unique ability to regulate gene expression through RNA interference. As a result of this ability, microRNAs can mediate a wide variety of cellular processes. In order to evaluate the function of miR-155 in MetS, we established a novel miR-155-/-/ApoE-/- (DKO) mouse model. Coupling this model with the use of normal rodent or high fat diets allowed us to investigate how states of caloric balance and surplus affected the manifestation of the individual MetS components. We found that male and female DKO mice fed a high fat diet had significantly augmented body masses of 18% and 10% respectively, when compared to ApoE-/- counterparts on the same diet. Evaluation of this phenotype with body composition analysis revealed an 18% and 46% increase in body fat percentage among the male DKO mice on normal and high fat diets, respectively. This trend was also observed in female DKO mice, albeit to a lesser extent. This phenotype was further substantiated by the observation of augmented gonadal white adipose tissue pad mass within male and female DKO mice fed either chow. This equated to a 43% and 112% increase in male mice and a 45% and 57% augmentation in female mice for normal and high fat chow diets, respectively. In light of our findings, we also evaluated how miR-155 impacted glucose and insulin sensitivity. We found levels of insulin to be augmented by 181% and 148% in male DKO mice on normal and high fat diets, respectively. Furthermore, we found these mice to be euglycemic. These observations suggest that DKO mice are IR but capable of compensating for their insensitivity with elevated insulin production. Due to the tight association between MetS and the development of non-alcoholic fatty liver disease (NAFLD) as well as CVD, we felt it prudent to investigate the manifestation of these conditions. We found elevated hepatic mass of 40% and 13% in male and female DKO mice on high fat chow. Furthermore, hepatic discoloration was seen in these mice prompting us to perform in-depth histological evaluation which revealed widespread steatosis, a hallmark of NAFLD. Meanwhile, investigation of atherosclerosis, the key underlying cause of most CVDs, unexpectantly revealed diminished development. Due to the complex nature of atherosclerosis it is tough to explain the exact reason for this observation. Independent reports have shown that miR-155 plays a critical role in the development, maturation, or activation of B-cell, T-cells, macrophages, and dendritic cells. As a result, decreased immune cell infiltration may be the root cause for the observed decline in atherosclerosis. Taking into account our observations of obesity, IR, and NAFLD in conjunction with independent findings of blood pressure mitigation by miR-155, we feel confident in reporting that miR-155 is a vital factor in preventing MetS and NAFLD development. Despite this, we surprisingly found atherosclerosis development to be diminished in these mice suggesting a pro-inflammatory role in atherogenesis. This duality highlights the complex and ambiguous nature of miRNAs. In light of this, further evaluations should be conducted to gain additional insight into these pathologies and hopefully the development of novel therapeutics.