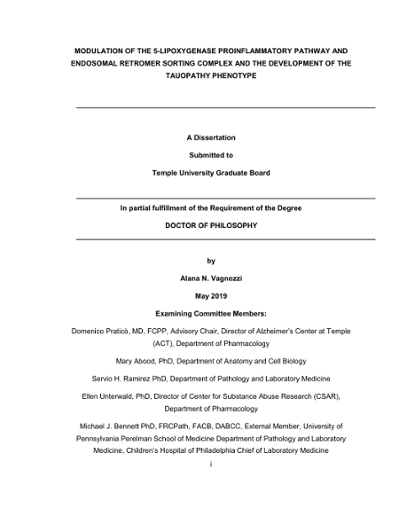 Neurodegenerative tauopathies represent a heterogeneous group of central nervous system (CNS) diseases characterized by accumulation of insoluble neurofibrillary tangles of tau protein, synaptic dysfunction, neuroinflammation, and progressive neuronal loss, culminating in debilitating cognitive decline. In recent years, studies have attempted to elucidate potential mechanisms underlying the pathogenicity of tauopathies, with particular focus on preventative strategies that may target key initiating factors or events which occur before the onset of memory loss and neurofibrillary tangle deposits in the brain. Two such potential initiating events are neuroinflammatory activation and improper protein sorting via the endosomal-lysosomal trafficking network. This work describes two novel players in each biological system, the 5-lipoxygenase proinflammatory pathway and its relevance to the neuroinflammatory response as well as the endosomal retromer complex in protein recycling. Importantly, we investigate the contribution of these pathways in the development of tau accumulation and pathology, with the ultimate goal to demonstrate the therapeutic potential of these novel players in neurodegeneration. In current literature, there is great debate whether neuroinflammation functions as a primary or secondary pathogenic event in tauopathies. Furthermore, investigating novel pathways which activate inflammation in the CNS is an integral part of understanding their relevance to neurodegeneration. Recent studies implicate the proinflammatory 5-lipoxygenase (5LO) enzymatic pathway as a potential effector of neuroinflammation in Alzheimer’s disease (AD); however, little is known about the role of 5LO on tau pathology in the absence of amyloid beta. Thus, our work focused on investigating the contribution of the 5LO pathway in tauoapthy by implementing a genetic approach to modulate this enzyme in a P301S mouse model of tauopathy and in neuronal cells. First, we provide evidence for an age-dependent and region-specific upregulation of the 5LO pathway (protein, message and activity) in a transgenic mouse model of tauopathy. Additionally, global genetic deletion of 5LO in this mouse model results in significant memory improvement, reduces neuroinflammation in association with reduced tau phosphorylation at specific epitopes, and improves synaptic pathology. Utilizing the opposite approach by overexpressing 5LO using AAV2/1, we demonstrate that tau mice given AAV-5LO perform significantly worse on several cognitive assessments, display elevated tau pathology and neuroinflammation, and have greater synaptic pathology. Mechanistically, the effect of 5LO modulation on tau phosphorylation is dependent on the activity of kinase, cdk5, as confirmed in a neuronal cell line. Simultaneously, an equally important aspect of tauopathies is the inefficient sorting and degradation of accumulated proteins in the brain. Improper degradation of toxic proteins is considered an early event in pathogenesis, and thus, targeting this aspect of neurodegeneration has received considerable attention in recent years. One such sorting mechanism, the endosomal retromer complex, has been implicated in abnormal processing of amyloid precursor protein (APP) and accumulation of amyloid beta (Aβ) within endosomes. Most notably, a small pharmacological chaperone mitigated this retromer-dependent effect on Aβ in primary hippocampal neurons. Current studies have only recently focused on the relationship between the retromer complex and tau accumulation, thus our aim was to investigate the effects of retromer dysfunction on the development of the tauopathy phenotype. First, we assessed that core components of the retromer complex are down-regulated in two distinct human primary tauopathies in cortical and hippocampal brain regions. Furthermore, retromer core protein levels are reduced in an age-dependent and region-specific manner in P301S mice. To manipulate the retromer complex, first, using a genetic approach, we demonstrate that knockdown of VPS35 using shRNA AAV resulted in exacerbation of cognitive and motor learning deficits in P301S mice. This coincided with greater accumulation of pathological and phosphorylated tau, increased neuroinflammation, and elevated synaptic pathology. Second, utilizing TPT-260, a pharmacological stabilizer of VPS35, we demonstrate ameliorated behavioral performance, reduced tau pathology and neuroinflammation, and rescued synaptic pathology in P301S mice. Finally, using a neuronal cell line, we confirm the direct role of VPS35 on tau phosphorylation and accumulation using genetic and pharmacological manipulation of VPS35, the effect of which, is mediated by lysosomal protease, cathepsin D. Taken together, our data reveal a direct role of the 5LO proinflammatory pathway on tau phosphorylation as well as a VPS35-dependent effect on tau solubility and pathological accumulation. Importantly, this work highlights the relevance of investigating the mechanisms that underscore neuroinflammatory activation and improper protein sorting in tauopathies and the potential of targeting these pathways for therapeutic intervention in neurodegenerative diseases.