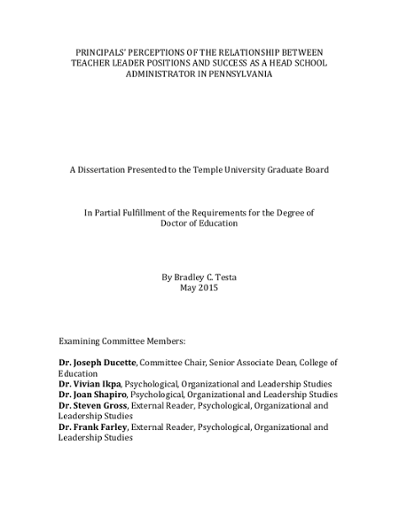 The K-12 principalship is a role unlike any other. The demands and responsibilities placed on this position are numerous, while the gratification and accolades, can, at times, be non-existent. As the years have progressed, the demands, roles and responsibilities that accompany this position have grown immensely. Principals that used to run and operate buildings now are often the instructional leader of the building, handle conflicts and budgetary issues, and be a community outreach worker, all while still managing and operating the school building. As this change in the principalship has occurred, and the demands of the position have increased, the pool of qualified candidates for these positions has decreased. Less people are becoming certified for these positions, and many candidates that are certified are not applying when they come open. This decrease in candidates is the result of a number of factors, including increased workload, salary that does not match the work and effort that principals put into the position on a daily basis, as well as the isolated environment that principals often have to work in as a result of the nature of the position. As a result, there is a shortage of effective/successful principals in Pennsylvania, and interview panels struggle to find and hire candidates that will succeed in these positions. This study attempted to aid interview panels and aspiring administrators by examining the relationship between teacher leadership positions and success as head school administrators in Pennsylvania. Principals were surveyed regarding the types of leadership positions that they held or served in during their tenure as a teacher, and how they felt each of these roles contributed to their success as a principal. More specifically, the study analyzed how each role impacts certain skills that are characteristic of effective principals. The goals of the study were to provide interview panels with information on which teacher leader positions help principals become successful, and also to give aspiring principals some insight into which positions will give them experience that could possibly lead to future success. The majority of respondents to the study had served in the classroom for a period of 2-10 years prior to entering the field of administration. In addition, most of the principals who participated in the study reported having served in a high school, along with having worked in a suburban setting, both as teachers and administrators. The role that was occupied most by the respondents was teacher mentor. In addition, it was found that principals believe that serving as a teacher mentor had the greatest impact on future administrative success, and that serving on the Student Assistance Program team had the least amount of impact. Principals who had not served in the leadership positions believed that they would have received the most benefit from having served as a department chair/curriculum coordinator, and that the least amount of benefit would have come from serving as an athletic coach. Also, principals not holding these positions recommended that aspiring administrators serve as teacher mentors, as they would garner the most benefit from this position. It was also found that athletic coaches were the least recommended of the five leadership positions. Lastly, principals who had served in these leadership roles during their tenures in the classroom were asked about how each of these roles affected their ability to perform twelve characteristics that effective principals share. When the results of these questions were analyzed, it was found that the three characteristics that were found to have been impacted the most from the leadership positions pertained to the visionary and forward-thinking aspects of the principalship, while the three characteristics that were found to receive the least amount of enhancement from the roles were those that are associated with the day-to day operations of the school building. From this, it can be concluded that serving in the five leadership roles will help administrators establish a long-term vision for the school, and be more of an instructional leader and keeper of the vision, rather than simply an operations manager. This further exacerbates and defines the difference between leadership and management.