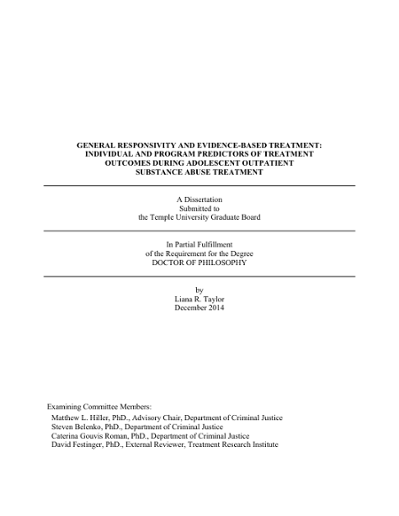 Since it was first articulated, the Risk-Need-Responsivity model (RNR; Andrews, Bonta, & Hoge, 1990) has been extensively researched and is regarded as an empirically supported model for providing effective correctional treatment. It is comprised of three core principles: the risk principle, which provides direction for who should receive treatment; the need principle, which identifies intermediate treatment targets; and the responsivity principle, which states how treatment programs should be structured. The RNR model is purported to be relevant for all offender populations, including female offenders (Dowden & Andrews, 1999a), juvenile offenders (Dowden & Andrews, 1999b), violent offenders (Dowden & Andrews, 2000), and sexual offenders (Hanson, Bourgon, Helmus, & Hogdson, 2009). Yet, the majority of RNR research has examined the risk and need principles, and the responsivity principle remains understudied. The responsivity principle includes two sub-principles: general and specific (Andrews, & Bonta, 2010). The current research explored the general responsivity principle, which states that programs should use theoretically relevant models for individual change, specifically cognitive-behavioral and cognitive-social learning models (Andrews & Bonta, 2010). The following techniques are consistent with these models: "role-playing, modeling, repeated practice of alternative behaviors, cognitive restructuring to modify thoughts/emotions, skills building, or reinforcement" (Andrews & Bonta, 2010, p. 50). Despite empirical support, the RNR model has received minimal application to juveniles, and it has not been widely tested in the substance abuse treatment context. Additionally, it is not clear whether adherence to the RNR model is relevant for reducing substance use outcomes in youth. Adolescent substance abuse treatment programs were designed to address substance use among juveniles, and have been widely researched to determine their effectiveness; yet their effectiveness remains understudied among juvenile offenders. These studies include examinations of specific treatment interventions used, such as Multisystemic Therapy. Many of these interventions are considered to be "evidence-based treatment" (EBT), but there is a wide variety of repositories that classify interventions as "evidence-based" with varying criteria used to classify them. The juvenile drug treatment court model (JDTC) was specifically developed to address substance use and crime among juvenile offenders; however, findings from empirical studies have not demonstrated a strong treatment effect. To address these gaps in the literature, secondary analyses were conducted on data collected from 132 adolescent outpatient substance abuse treatment programs (AOPs) and 10 juvenile drug treatment courts nationwide. This research was an application of the general responsivity principle in the AOP and JDTC context to determine the impact of responsivity adherence on the odds of rearrest and substance use severity. The analyses also included an examination of evidence-based treatment (EBT) in both samples to determine the influence of EBT use scores on the odds of rearrests and substance use severity scores. To examine the AOP sample, multilevel models were used to examine the individual- and program-level impact of responsivity adherence and EBT use. To examine the JDTC sample, multivariate analyses were used to examine the individual-level impact of responsivity adherence and EBT use. Overall, responsivity adherence was not significantly associated with rearrests among AOP participants, nor was it significantly associated with substance use severity scores. Additionally, the odds of rearrest were significantly greater among individuals who received interventions with a higher EBT use score; though, there was no association between the average EBT use scores across programs and the odds of rearrest. There was no significant association between individual- and program-level EBT use scores and substance use severity. Among JDTC participants, an increase in responsivity adherence was associated with an increase in the odds of rearrest and substance use severity. A similar association emerged between EBT use scores and both outcomes, wherein increases in EBT use scores were significantly associated with an increase in the odds of rearrest and substance use severity. The results of the analyses suggest the need for further specification of both general responsivity adherence and "evidence-based" treatment for use in future research and theory; specifically, further elaboration of the general responsivity-adherent techniques and clear criteria for classifying interventions as "evidence-based treatment." The findings also imply that certain types of treatment interventions are more compatible with the JDTC model than other interventions. Additional analyses suggest the possibility that general responsivity adherence and evidence-based treatment may not be unique constructs. Future research may benefit through exploring evidence-based treatment as a criterion for adherence to the general responsivity principle.