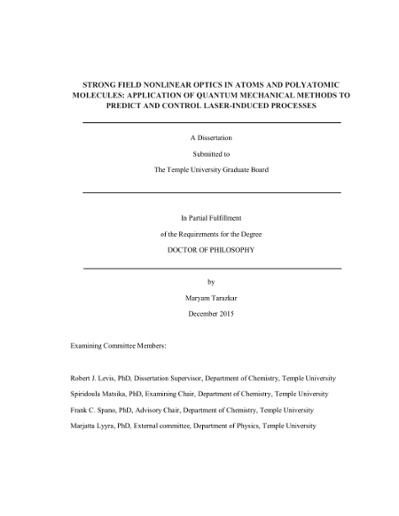 The central objective of this dissertation is developing new methods for calculating higher-order nonlinear optical responses of atoms, molecules, and ions, and discussing the relevant physical mechanisms that give rise to harmonic generation, Kerr effect, and higher-order Kerr effect. The applications of nonlinear optical properties in development of predictive models for femtosecond laser filamentation dynamics, photoemission spectroscopy, imaging, and design of new molecular systems have motivated the theoretical investigations in advancing methods for calculating nonlinear optical properties and finding the optimum conditions for controlling the nonlinearities. The time-dependent nonlinear refractive index coefficient 4 n is investigated for argon and generalized for all noble gas atoms helium, neon, krypton, and xenon in the wavelengths ranging from 250 nm to 2000 nm, using ab initio methods. The secondorder polynomial fitting of DC-Kerr, electric-field-induced second-harmonic generation (ESHG), and static second-order hyperpolarizability have been performed, using an auxiliary electric field approach to obtain the corresponding fourth-order optical properties. An expression on the basis of static, DC-Kerr, DFWM fourth-order hyperpolarizability is derived, which allows the calculations of the DSWM coefficients with considerably reduced error. The results of the calculations suggest that filament stabilization is most likely to be induced by the generation of free electrons. Applications of these calculations resolve the HOKE controversy and are important for the development of predictive models for femtosecond laser filamentation dynamics. In a series of proof-of-concept studies, the approach was employed for calculating dynamic linear and nonlinear hyperpolarizability of the radical cations. In this regard, the polarizability and second-order hyperpolarizability of nitrogen radical cation were investigated, using density functional theory (DFT) and multi-configurational self-consistent field (MCSCF) methods. The open-shell electronic system of nitrogen radical cation provides negative second-order optical nonlinearity, suggesting that the hyperpolarizability coefficient for nitrogen radical cation, in the non-resonant regime is mainly composed of combinations of virtual one-photon transitions rather than two-photon transitions. The calculations of second-order optical properties for nitrogen radical cation as a function of bond length have been investigated to study the effect of internuclear bond distance on optical process. The variation of nonlinear responses versus bond length shows the potential application in finding optimum conditions for higher values of nonlinear coefficients. Furthermore, the computation of dynamic second-order hyperpolarizabilities for multiply ionized noble gases have been studied in the wavelength ranging from 100 nm to the red of the first multi-photon resonance all the way toward the static regime, using the MCSCF method. The results indicate that the second-order hyperpolarizability coefficients decrease when the electrons are removed from the systems. As the atoms reach higher ionization states, the second-order hyperpolarizability responses as a function of wavelength, become less dispersive. The second-order hyperpolarizability coefficients for each ionized species have also been investigated in terms of quantum state symmetries; the results suggest that the sign of the optical responses for each ionized atom depends on the spin of the quantum states defined for the ionized species. The calculations are of value for predictive models of high-harmonic generation in multiply ionized plasma at X-ray photon energies. This research also focuses on investigating possible mechanisms for photodissociation of polyatomic molecules (acetophenone and the substituted derivatives) ionized through strong field infrared laser pulses. In this regard, quantum mechanical methods are combined with pump-probe spectroscopy to understand and control the dissociation dynamics in strong field regime. The applications of quantum mechanical models in interpreting time-resolved wavepacket dynamics and achieving coherent control has stimulated the interest to explore the PESs and investigate the role of conical intersections in wavepacket dynamics in strong field regime. The electronic ground and excited states for acetophenone radical cation and the substituted derivatives have been investigated to probe the resonance features observed in measurements at 1370 nm with laser intensity of 1013 W cm-2. The ten lowest lying ionic potential energy surfaces (PESs) of the acetophenone radical cation were explored, and the three-state conical intersection was mapped onto the PES, using MCSCF model to propose a photo-dissociation mechanism for acetophenone undergoing tunnel ionization and elucidate the potential dissociation pathways for formation of benzoyl fragment ion, as well as phenyl, acylium, and butadienyl small fragment ions. Similar calculations are presented for propiophenone radical cation which support the existence of a one-photon transition from the ground ionic to a bright dissociative D2 state, where motion of the acetyl group from a planar to nonplanar structure within the pulse duration enables the otherwise forbidden transition. The wavepacket dynamics in acetophenone molecular ion is modeled using the classical wavepacket trajectory calculations, to propose the mechanism wherein the 790 nm probe pulse excites a wavepacket on the ground surface D0 to the excited D2 surface at a delay of 325 fs. The innovations of this research are used to design control strategies for selective bond-breaking in acetophenone radical cation, as well as design control schemes for other molecules.