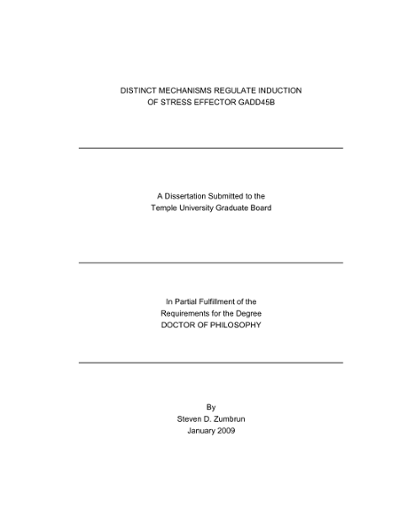 The GADD45 family of proteins consists of three small nuclear proteins, GADD45A, GADD45B, and GADD45G, which are implicated in modulating the cellular response to various types of genotoxic/physiological stress. This family of proteins has been shown to interact with and modulate the function of cell-cycle control proteins, such as p21 and cdc2/cyclin B1, the DNA repair protein, PCNA, key stress response MAP kinases, including MEKK4 (an upstream regulator of JNK kinase), and p38 kinase. Despite similarities in amino acid sequence, structure and function, each gadd45 gene is induced differentially, depending on the type of stress stimuli. For example, the alkylating agent, methylmethane sulfonate (MMS), rapidly induces all three genes, whereas hydrogen peroxide and sorbitol preferentially induce gadd45a and gadd45b, respectively. Studies of the mechanisms of the stress-mediated induction of the gadd45 genes have predominantly focused on gadd45a, with knowledge of gadd45b and gadd45g regulation lacking. Thus, in order to generate a more complete understanding of the collective regulation of the gadd45 genes, a comprehensive analysis of the stress-mediated induction of gadd45b has been carried out. Towards this end, a gadd45b promoter-reporter construct was generated, consisting of 3897bp sequence upstream of the transcription start site of gadd45b, fused to a luciferase reporter. In a human colorectal carcinoma cell line (RKO), in which gadd45b mRNA levels profoundly increase by various stress stimuli, we observe similar, high levels of induction of the gadd45b-luciferase construct with MMS or UVC treatments, but surprisingly not with sorbitol or anisomycin. Linker-scanning mutagenesis of the gadd45b promoter reveals several important MMS and UVC cis-acting responsive elements contained within the proximal promoter, including a GC-rich region and the CCAAT box. Furthermore, we have identified three constitutively bound transcription factors, Sp1, MZF1, and NFY, and one inducible factor, Egr1, which bind to these regions and which contribute to MMS-responsiveness. In contrast, a post-transcriptional mechanism appears to regulate gadd45b induction upon sorbitol treatment, as this treatment increases the gadd45b mRNA half-life, compared to MMS treatment. Interestingly, with the exception of a common cis-element, the stress-mediated induction of gadd45b appears to be mechanistically distinct from gadd45a. In conclusion, this study provides novel evidence that gadd45b induction by distinct stress agents, MMS and sorbitol, is regulated differentially at the level of mRNA transcription or mRNA stability, respectively.