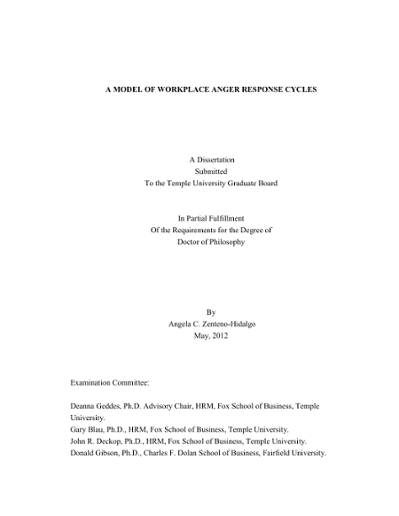 Anger is considered a basic emotion, evoked typically by something that interferes with the person's execution of plans or attainment of goals, as well as the perception of harm and unfair circumstances or behavior (Shaver, Schwartz, Kirson, & O'Connor, 1987). Research examining anger is largely focused on negative individual and organizational outcomes, such as raised blood pressure and heart disease, decreased productivity, reduced job satisfaction and increased job stress, and aggressive responses (Geddes & Callister, 2007; Gibson, Schweitzer, Callister, & Gray, 2009). However, the paradoxical nature of anger--having the capacity of both negative and positive consequences--is increasingly acknowledged by influential scholars (Geddes & Callister, 2007; Gibson & Callister, 2010; Miron-Spektor & Rafaeli, 2009). For instance, both theory and data point out that anger expression can have important adaptive functions such as signaling that goals are blocked, communicating to others that their actions are viewed as threatening, and mobilizing protective actions when dealing with a perceived threat (Averill, 1983; Izard, 1993; Tafrate, Kassinove, & Dundin, 2002). In addition, most research on consequences of anger expression in the workplace focuses on individuals' characteristics and the intensity of the expression of anger. This focus, however, doesn't capture the significant social components of emotions including how their expression shapes the emotions, thoughts and behaviors of others (Hareli & Rafaeli, 2008; Parkinson, Fischer, & Manstead, 2005). The goal of this dissertation is to advance understanding of the complexity of workplace anger expression, focusing specifically on outcomes and social components of emotions. To do this, the dissertation proposes a Model of Workplace Anger Response Cycles (WARC). The model shows that the outcomes of anger expression are influenced by the interaction of the expresser and a social partner and the context where this interaction occurs--e.g. organizational culture, emotional climate, and anger expression tolerance. In addition, the model proposes that these interactions form emotional cycles and identifies factors that affect the association of anger expression and its positive or negative outcomes, namely, intensity of the message, characteristics of the individuals involved and their relationship. Given the complexity and number of variables included in the WARC model, only some were studied empirically for this dissertation. The empirical study reported here involved collection of data from full and part time employees (n=177) through on-line surveys, which were analyzed using Partial Least Square Structural Equation Modeling (PLS-SEM). The results show the salience of relationship quality, observer response, power, and gender in the explanation of outcomes of anger expression in the workplace. In particular, results support existing evidence that female expressions of anger are negatively judged compared to those by male (e.g., Brescoll & Uhlmann, 2008; Gibson, Schweitzer, Callister, & Gray, 2009; Lewis, 2000). Furthermore, findings indicate that even in organizations where anger expressions are more accepted, in general, expressions of anger by females are less welcome than those from males. Additionally, this study provides further evidence that when anger is expressed to a lower power individual, results are more positive--i.e., anger feelings are reduced and problematic situations improve--than when anger is expressed to a higher power individual (Fitness, 2000; Kuppens, Van Mechelen, & Meulders, 2004; Van Kleef & Côté, 2007). Finally, findings of this study show that relationship quality among the interactants is critical to explain the outcomes of anger expression. Furthermore, results show that relationship quality effects are partially mediated by observer response, and moderated by zone of anger tolerance. Thus, results confirm the underlying general hypothesis of this work, that emotional experiences and consequent related interactions are strongly tied to context characteristics. Therefore, to truly understand this type of phenomena and be able to predict results, consideration of multi-level variables must be integrated to the analysis.