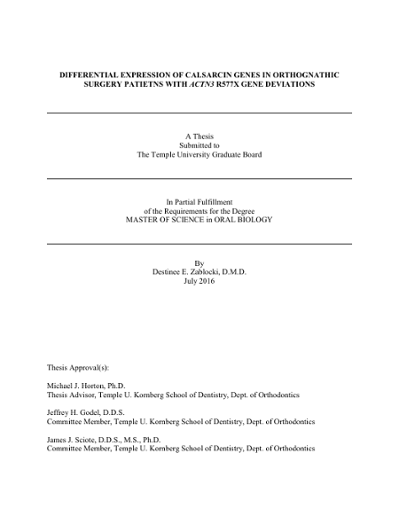 Objective: Malocclusion is a complex musculoskeletal trait, with muscle playing an integral role in vertical facial development. A single nucleotide polymorphism (SNP) produces the R577XX nonsense mutation in the alpha-actinin-3 (ACTN3) gene, creating a stop codon and loss of its protein. With loss of ACTN3, alpha-actinin-2 (ACTN2) is upregulated. Calsarcins, known inhibitors of calcineurin activation, preferentially bind ACTN2 leading to a surge in free calcineurin. The increase in calcineurin activity produces the phenotypic shift of fast muscle fibers toward the slow myogenic program seen in the ACTN3 null genotype (Seto et al., 2013). Here, we have tested whether calsarcin gene expression is affected by ACTN3 genotypes in human masseter muscle. Methods: Subjects undergoing orthodontic treatment and orthognathic surgery were recruited from the University of Lille, Department of Oral and Maxillofacial Surgery in Northern France. During the bilateral sagittal split osteotomy, masseter muscle samples were collected from the discarded section of deep anterior superficial masseter muscle, snap frozen, and shipped to Dr. Sciote’s lab at Temple University. RNA from masseter muscle samples was isolated from 41 subjects using TRIzolTM reagent. MYOZ gene expression was quantified by RT-PCR using an adult skeletal muscle reference standard (commercially prepared skeletal muscle RNA; Ambion, Inc), and individual primer-probe sets for MYOZ1, MYOZ2, MYOZ3, and HPRT1 (utilized for normalization of data). ANOVA and unpaired t-tests were used to determine the significance of expression differences between MYOZ genes and by ACTN3 R577X genotypes, as well as by malocclusion classes. Pearson analyses were used to determine correlations between MYOZ expression and fiber type mean percent occupancies. Results: The main aim of this project was to determine whether expression of the three calsarcin genes, MYOZ1, 2, and 3, differs between subjects with RR, RX and XX genotypes for the ACTN3 gene, as well as between sagittal and vertical classes of malocclusion, asymmetries and TMD. Differences were found for MYOZ3 expression where relative quantities in males, but not females, decreased progressively from the ACTN3 RR, to RX, and XX genotypes. Among subjects with the RX genotype, expression differed significantly between males and females by an unpaired t-test. A statistically significant difference was detected between MYOZ2 and Class II, Class III malocclusions (p=0.05). Sagittal differences were compared further by ANOVA analyses with a statistically significant difference detected for MYOZ3 with a probability of 0.02. Correlation analyses comparing fiber type mean % occupancy with calsarcin gene expression revealed a significant positive relationship between MYOZ2 and type I (slow-twitch) fibers. Correspondingly, a significant correlation of MYOZ2 expression with type IIA and IIX (fast-twitch) fibers was negative. Conclusions: The greatest relative quantity of RNA for the three calsarcin genes was found in MYOZ3, suggesting more calsarcin-3 may be needed in masticatory muscle structure and function than other calsarcin isoforms. Alternatively, high expression of MYOZ3 in the masseter samples may indicate that there are relatively greater amounts of that isoform in cranial muscle than in the limb skeletal muscle standard used in these studies. Also, relative quantities of MYOZ3 expression in males decreased progressively from the ACTN3 RR, to RX, and XX genotypes. While this data may suggest that the ACTN3 R577X polymorphism may affect MYOZ3 expression in males of the malocclusion patient population, an increased sample of male subjects would be needed to determine if this trend has true significance. Expression of MYOZ2 (calsarcin-1) was strongly correlated with slow fiber-type occupancy in masseter muscle of our patient population. The muscle-specific expression of each calsarcin may lend to the understanding of this result. MYOZ2 is the only isoform found in both cardiac muscle and slow-twitch skeletal muscle, while MYOZ1 and MYOZ3 are both found in skeletal muscle with a predilection towards fast-twitch skeletal muscle (Frey et al., 2004).