An Osteoporosis Intervention Program for Chinese Women--Knowledge, Self-Efficacy, and Intention 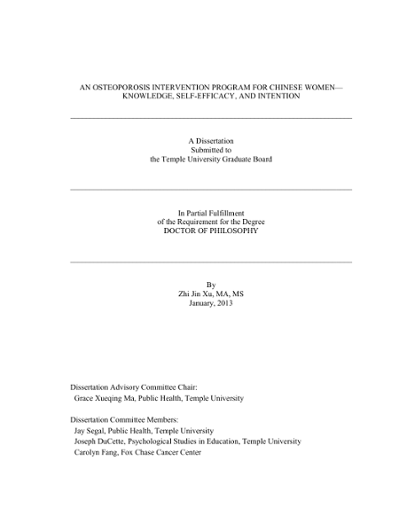 Osteoporosis is a disease of the bone and skeletal system which weakens bone structure and results in fractures. The disease has caused a heavy economic burden in the U.S., especially among Americans over the age of 50. According to The Surgeon General's report on bone health in 2004 (U.S. Department of Health and Human Service (USDHHS), 2004), an estimated 10 million Americans over age 50 have osteoporosis, and another 34 million have osteopenia and are at risk of osteoporosis. The projected cost directly associated with osteoporosis is $34.0 billion in 2005 and will rise to more than $41.4 billion in 2025 (Vanness & Tosteson, 2005). Osteoporosis also results in serious and often devastating health problems for affected individuals (Riggs & Melton, 1995) because of the fractures it causes. Riggs and Melton (1995) estimated that each year 1.5 million people suffer an osteoporosis-related fracture. Unlike genetic risk factors that can be nearly impossible to modify, living on a calcium-rich diet is a lifestyle choice. Effective intervention programs can be useful tools to educate people to adopt a calcium-rich diet. Studies have shown that a calcium-rich diet can increase bone mineral density and intervention programs can facilitate the process of the lifestyle change (Wong, Lau, E.M., Lau, W.W., & Lynn, 2004; Lv & Brown, 2011). However, effective intervention programs against osteoporosis are limited for minorities, and specifically, for elderly Chinese women. The prevalence of osteoporosis in Chinese women is high but the knowledge level is low (Babbar et al., 2006; Lau, Woo, Leung, Swaminathan, & Leung, 1992), which provides an opportunity for intervention. A community-based intervention program was designed based on the modified health belief model (HBM). Its content was specifically tailored to the cultural background and the characteristics of the Chinese women living in the Greater Philadelphia area, based on the findings from previous studies. The intervention program was implemented and its effectiveness was evaluated in a 2-group quasi-experimental study. The study recruited eight (8) Chinese community organizations and assigned them to receive either the intervention program or the control program according to the timing of their agreement to participate and the balance of total participants recruited for each study group at the time. A total of 102 Chinese women were enrolled from the three (3) organizations that were assigned to the Intervention Group and 90 from the five (5) organizations that were assigned to the Control Group. Participants in the Intervention Group received a 30-mintue education session delivered in Chinese (Mandarin). The education focused on the Health Belief Model constructs in the context of osteoporosis intervention. It provided information about osteoporosis, including the functions of the bones, prevalence and risk factors. It highlighted participants' susceptibility to osteoporosis, the consequences and severity of the disease, and targeted messages to increase self-efficacy and decrease barriers. The contents were tailored to the study population. The osteoporosis education was delivered in plain language to suit the population's low educational level and used examples relevant to their cultural background. Participants in the Control Group watched a 30-minute video about liver functions and hepatitis B transmission and prevention. The study tested three (3) primary hypotheses that, compared with the Control Group, the Intervention Group at post-intervention would have 1) a higher knowledge level of osteoporosis, 2) a higher self-efficacy for adopting a calcium-rich diet, and 3) a higher intention level to consume more calcium-rich food items. The data were collected at three time points: baseline, post-intervention, and three months after the intervention. The scores of knowledge level and self-efficacy were analyzed by mixed linear regression models with adjustment of the baseline variables and accounted for the correlations among the participants from the same site. The intention stage was analyzed by a multinomial logistic regression model with adjustment of baseline intention stage and the baseline variables. The results for the study were consistent with all three primary hypotheses. The intervention program increased the knowledge level of osteoporosis and perceived self-efficacy in the Intervention Group. At post-intervention, the differences between the two study groups was 0.17 (95% CI: 0.02, 0.32; p-value&lt;0.037) for the knowledge scores, and 0.34 (95% CI: 0.12, 0.56; p-value&lt;0.001) for the self-efficacy scores. The results also suggested that the intervention program moved the participants in the Intervention Group to higher intention stages. The odds ratio (Intervention/Control Group) of being at a higher intention stage was 3.29 (95% CI: 1.23, 8.82; p-value=0.016). The study showed that the community-based and culturally tailored intervention program designed for the elderly Chinese women was effective. It increased the osteoporosis knowledge level and self-efficacy for adopting a calcium-rich diet and moved participants to a higher intention stage of consuming more calcium-rich food items. Additionally, the study showed that more than 50% of the participants had low bone mass. In conclusion, this intervention program reached a hard-to-reach population of elderly Chinese women and provided public health professionals a useful tool to work with. The high provalance of low bone mass in this population provided the public health agencies useful information to aid their decisions on resource allocation.