Motivation, Self-determination, and Willingness to Communicate by English Learners at a Japanese High School 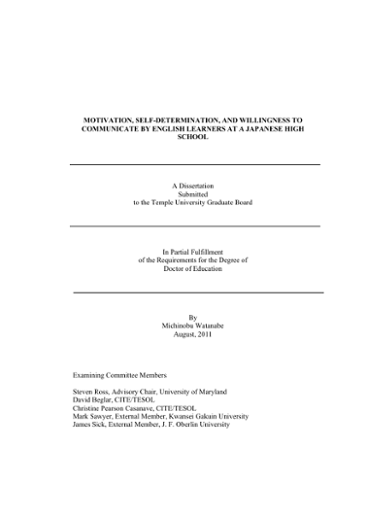 In this longitudinal study, I investigate changes in Japanese high school English learners' motivation over time, and whether the initial individual differences and the changes in those differences over time predict their final English achievement and overall academic achievement in high school. A questionnaire, which was developed by drawing on the Attitude/Motivation Test Battery (Gardner, 1985b), the self-determination-theory scale (e.g., Noels, Pelletier, Clément, & Vallerand, 2000), and the willingness-to-communicate scale (e.g., McCroskey, 1992), was administered to 190 students three times at the beginning of each academic year of high school; follow-up interviews were conducted with 13 selected students. The questionnaire data were analyzed using the Rasch rating scale model, ANOVAs, and the latent growth curve modeling. The major findings include the following. First, twelve motivational constructs were identified. Second, significant differences were found over time for Attitudes Toward Learning English, Desire to Learn English, and Motivational Intensity; the other constructs were stable across time. Third, the students' average motivational profile was characterized by high External Regulation and Instrumental Orientation, and low Willingness to Communicate with Strangers across time. Fourth, Motivational Intensity, Attitudes Toward Learning English, and Intrinsic Motivation appear to directly affect both English achievement and overall academic achievement. The interview data were transcribed and analyzed qualitatively. The major findings include the following. First, the students' motivation seemed to be temporarily raised or lowered by `motivation-fluctuating factors' (e.g., test results), but it was stabilized by motivation-stabilizing factors (e.g., past travel and learning experiences). Second, in the face of university entrance examinations, the students' negative feelings toward examination English seemed to decrease their motivation, whereas positive attitudes toward examination English later in high school seemed to enhance motivation. Third, the students had a growing awareness of the need for practical and communicative English skills in the future. However, this awareness did not lead to greater willingness to communicate probably because of various interfering factors. Other interview results provided an in-depth understanding of and supporting evidence for some of the questionnaire results. Implications for researchers, school administrators, and teachers are provided.