The Profane and Profound: American Road Photography from 1930 to the Present 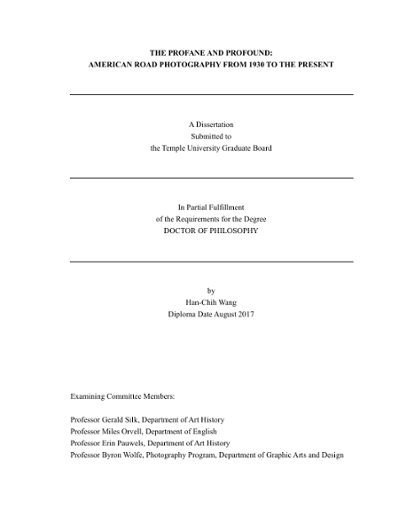 This dissertation historicizes the enduring marriage between photography and the American road trip. In considering and proposing the road as a photographic genre with its tradition and transformation, I investigate the ways in which road photography makes artistic statements about the road as a visual form, while providing a range of commentary about American culture over time, such as frontiersmanship and wanderlust, issues and themes of the automobile, highway, and roadside culture, concepts of human intervention in the environment, and reflections of the ordinary and sublime, among others. Based on chronological order, this dissertation focuses on the photographic books or series that depict and engage the American road. The first two chapters focus on road photographs in the 1930s and 1950s, Walker Evans’s American Photographs, 1938; Dorothea Lange’s An American Exodus: A Record of Human Erosion, 1939; and Robert Frank’s The Americans, 1958/1959. Evans dedicated himself to depicting automobile landscapes and the roadside. Lange concentrated on documenting migrants on the highway traveling westward to California. By examining Frank’s photographs and comparing them with photographs by Evans and Lange, the formal and contextual connections and differences between the photographs in these two decades, the 1930s and the 1950s, become evident. Further analysis of the many automobile and highway images from The Americans manifests Frank’s commentary on postwar America during his cross-country road trip—the drive-in theater, jukebox, highway fatality, segregation, and social inequality. Chapter 3 analyzes Ed Ruscha’s photographic series related to driving and the roadside, including Twentysix Gasoline Stations, 1962 and Royal Road Test, 1967. The chapter also looks at Lee Friedlander’s photographs taken on the road into the mid-1970s. Although both were indebted to the earlier tradition of Evans and Frank, Ruscha and Friedlander took different directions, representing two sets of artistic values and photographic approaches. Ruscha manifested the Pop art and Conceptualist affinity, while Friedlander exemplified the snapshot yet sophisticated formalist style. Chapter 4 reexamines road photographs of the 1970s and 1980s with emphasis on two road trip series by Stephen Shore. The first, American Surfaces, 1972 demonstrates an affinity of Pop art and Frank’s snapshot. Shore’s Uncommon Places, 1982, regenerates the formalist and analytical view exemplified by Evans with a large 8-by-10 camera. Shore’s work not only illustrates the emergence of color photography in the art world but also reconsiders the transformation of the American landscape, particularly evidenced in the seminal exhibition titled New Topographics: A Man-Altered Landscape, 1975. I also compare Shore’s work with the ones by his contemporaries, such as Robert Adams, William Eggleston, and Joel Sternfeld, to demonstrate how their images share common ground but translate nuanced agendas respectively. By reintroducing both Evans’s and Frank’s legacies in his work, Shore more consciously engaged with this photographic road trip tradition. Chapter 5 investigates a selection of photographic series from 1990 to the present to revisit the ways in which the symbolism of the road evolves, as well as how artists represent the driving and roadscapes. These are evident in such works as Catherine Opie’s Freeway Series, 1994–1995; Andrew Bush’s Vector Portraits, 1989–1997; Martha Rosler’s The Rights of Passage, 1995; and Amy Stein’s Stranded, 2010. Furthermore, since the late 1990s, Friedlander developed a series titled America by Car, 2010, incorporating the driving vision taken from the inside seat of a car. His idiosyncratic inclusion of the side-view mirror, reflections, and self-presence is a consistent theme throughout his career, embodying a multilayered sense of time and place: the past, present, and future, as well as the inside space and outside world of a car. Works by artists listed above exemplify that road photography is a complex and ongoing interaction of observation, imagination, and intention. Photographers continue to re-enact and reformulate the photographic tradition of the American road trip.