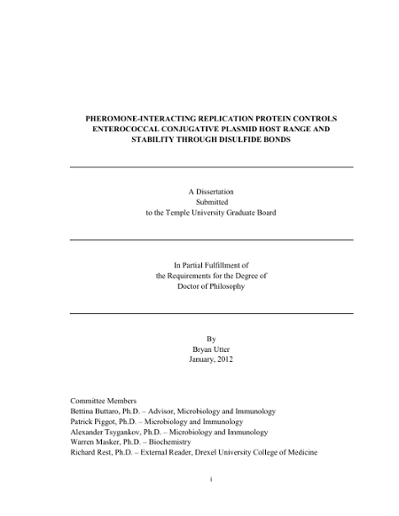 Enterococci are found in soil, sewage, food, water, and are commensal to the gastrointestinal tracts of mammals, insects, and birds. Enterococci often become nosocomial pathogens that cause a wide variety of diseases including urinary tract infections, endocarditis, and septicemia. These infections are often difficult to treat with antibiotics because most of the nosocomial strains are multi-drug resistant. Enterococcal plasmids function as reservoirs for resistance genes because they are extremely stable, allow for specific and efficient transfer, and can acquire resistance determinants from the chromosome and other plasmids. Additionally, enterococcal plasmids transfer across species boundaries transferring resistance genes like vancomycin to species like Staphylococcus aureus. There are two types of enterococcal plasmids, pheromone-responsive and broad host range. Pheromone-responsive plasmids are extremely stable, have a limited host range, and are primarily found in Enterococcus faecalis. Broad host range plasmids of E. faecalis and Enterococcus faecium are less stable than pheromone-responsive plasmids, but have an expanded host range into other Gram-positive species. E. faecalis has at least 25 known pheromone-responsive conjugative plasmids. One of the most extensively studied pheromone-responsive conjugative plasmids, pCF10. Conjugation of pCF10 from donor to recipient cell is induced by pheromone cCF10. cCF10 is contained within n the lipoprotein signal sequence encoded by the E. faecalis chromosomal gene ccfA. The lipoprotein signal sequence is processed by a series of proteolytic cleavage events to produce mature cCF10. Maturation of pheromone cCF10 produces three peptides: pre-cCF10 (CcfA1-22), cCF10 (CcfA13-19), and CcfA1-12. Cells containing pCF10 continue to produce cell membrane associated precursor pheromone of cCF10 (pre-cCF10), as well as, secreted and cell wall-associated cCF10. The presence of cCF10 does not self-induce conjugation by the donor cell because of two inhibitory molecules, PrgY and iCF10. Transmembrane protein PrgY is encoded by pCF10 and reduces cell wall associated cCF10, iCF10 is a pCF10 encoded inhibitory peptide (AITLIFI) that binds to PrgX, preventing cCF10 binding. While cCF10 controls pCF10 conjugation, pre-cCF10 controls host range of pCF10 by interacting with pCF10 replication initiation protein PrgW. cCF10 can initiate conjugation and mobilize the transfer of plasmids into other species, including Lactococcus lactis, but pCF10 cannot be maintained within the cell. However, if L. lactis is engineered to produce pre-cCF10, pCF10 can be maintained. The pre-cCF10 involvement in the establishment of pCF10 into other species might be related to the observation that it binds to the pCF10 replication initiation protein PrgW. By in vitro affinity chromatography experiments, interaction of cCF10 and pre-cCF10 with PrgW induced changes in PrgW mobility in gel electrophoresis that caused by formation of doublets and formation of aggregates which were thought to be mediated by disulfide bonds. Initial evidence of regulation of PrgW conformation by disulfide bonds was seen in Western blots of E. faecalis whole cell lysates where PrgW migration is sensitive to reduction. Sequence alignment comparisons between PrgW and a group of 54 of 59 known RepA_N superfamily proteins in E. faecalis revealed three highly conserved cysteines; these RepA_N proteins had a limited host range to E. faecalis. To study the importance of theses cysteines in pCF10 maintenance and host range limitation, prgW single, double, and triple cysteine to alanine (C to A) substitutions were generated. The cysteine mutant prgW was cloned into a plasmid functioning as either a contained the prgW alone (pORI10), or containing prgW with genes necessary for efficient pCF10 maintenance (pMSP6050). While all cysteine mutant plasmids of pORI10 and pMSP6050 were still capable of replicating in E. faecalis, the plasmid stability and copy number decreased, providing evidence that the cysteines were important to PrgW function. Additionally, Western blot analysis revealed PrgW C to A substitutions decreased PrgW aggregation. Mutations of PrgW cysteines reduced pMSP6050 stability and aggregation, but increased host range to L. lactis. Both L. lactis engineered to produce pre-cCF10 and the mutation of the conserved cysteines of PrgW extended host range of pMSP6050 into L. lactis. These data taken together with the observations that pre-cCF10 induced PrgW aggregation suggested that pre-cCF10 regulated the activity of the PrgW replication initiation protein through disulfide bonds. While the conserved cysteines of RepA_N proteins are found only in E. faecalis, phylogenetic analysis revealed that RepA_N homologs lacking the three cysteines are also found in E. faecium or S. aureus, suggesting that the host range of multiple plasmids might be affected by cysteine bond formation. Phylogenetic analysis also showed that the RepA_N proteins of enterococci and staphylococci appear to have evolved to determine host range based on the presence of two of the three conserved cysteines. Modular evolution of E. faecalis plasmids, like pCF10, that contained RepA_N proteins with three conserved cysteines, might have determined the fate of the plasmid as a limited host range, stable reservoir for antibiotic resistance.