The Beautiful Struggle: an Analysis of Hip Hop Icons, Archetypes, and Aesthetics 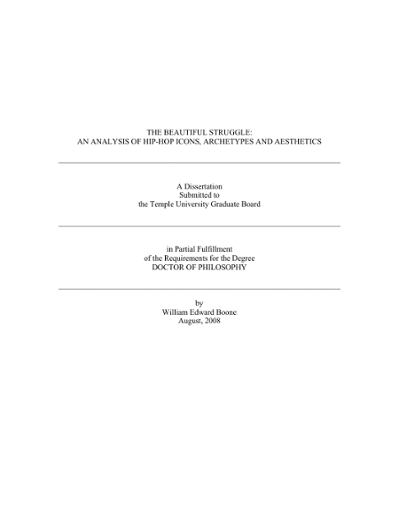 Hip hop reached its thirty-fifth year of existence in 2008. Hip hop has indeed evolved into a global phenomenon. This dissertation is grounded in Afro-modern, Afrocentric and African-centered theory and utilizes textual and content analysis. This dissertation offers a panoramic view of pre-hip hop era and hip hop era icons, iconology, archetypes and aesthetics and teases out their influence on hip hop aesthetics. I identify specific figures, movements and events within the context of African American and American folk and popular culture traditions and link them to developments within hip hop culture, discourse, and aesthetics. Because hip-hop emerged as an American phenomenon, I examine pre-hip hop American popular culture in the twentieth century such as America's World's Fairs, superhero mythology, popular culture iconography, etc. and illustrate the ways in which they served as cultural, social and historical precursors to hip hop aesthetics. Chapter 1 provides an introduction, which includes a definition of terms, statement of the problem and literature review. It also offers a perfunctory discussion of hip hop as culture. Chapter 2 examines pre-hip hop era African-American and American iconography, iconology and archetypes and the subcultures that spawned them (e.g. sports culture, comic super hero narratives, westerns, and the culture of capitalism, etc.). I explore early twentieth century popular culture, iconography, and manhood, and link them to hip-hop aesthetics. Lastly, this chapter identifies Afrocentric cross-currents within hip hop culture, which I describe as the post-Afrocentric movement in hip hop culture, and illustrate the ways in which hip hop culture grappled with the efficacy and viability of Afrocentric motifs, theory and aesthetics Chapter 3 offers a comparative analysis of blues and hip hop aesthetics. I explore gender dynamics within the context of inter-genre, call-and-response between male emcees and female neo-soul artists. Chapter 4 traces the development of hip-hop aesthetics and draws on African, American and African-American cultural practices to analyze its development. I focus on early characteristics of hip-hop culture, which are foundational components of hip-hop expression such as the influence of comic book super hero narratives. Hip-hop aesthetics are an amalgamation of post-modern, post-industrial, urban blues sensibilities filtered through African-American musical traditions. I utilize Bakari Kitwana's conceptualization of the hip hop worldview as a basis for highlighting hip hop attitudes, aesthetics, and expectations. Lastly, chapter 4 expands upon previous socio-economic discussions on hip hop culture with a focus on hip hop aesthetics and expression. In chapter 5, I identify specific pre-hip hop icons and their influence on hip-hop aesthetics. I examine the significance of the selection of these icons and their relevance to hip-hop aesthetics. This chapter explores hip-hop iconography, iconology and archetypes. I explore the significance of specific icons and archetypes within hip-hop culture and examine the socio-historical, political, and cultural implications of their selection. Icons and archetypes are integral parts of African, African-American, and American culture. I illustrate how these cultural origins are reflected within hip-hop's engagement of American popular culture icons. I also identify more recent hip hop icons and archetypes (e.g. the hater and gold digger), which operate as signifiers in hip hop narratives and aesthetics. Chapter 6 identifies specific characteristics of hip hop expression. I examine black male identity construction as it relates to hip-hop aesthetics and archetypal influences, particularly notions of 'bad" and "cool" within hip-hop culture. Perhaps more than any other African-American archetype, the badman/bad nigga archetype has survived within African-American male narratives. I explore the evolution of bad within hip hop aesthetics and offer a cultural analysis of 1984, identifying specific icons (e.g. Run-DMC), attitudes, values and trends that shaped both hip-hop culture and American popular culture. 1984 is an ideal site by which to examine the interface between race, class, sex, politics, American violence, technology, and pop culture. I examine specific cross-currents within 1980s American popular media and explore the ways in which hip hop narratives and aesthetics reappropriate and engage specific popular culture texts. I assert that not only was the framework for hip-hop aesthetics were solidified during the early 1980s, but also the framework for a new popular culture discourse effected by shifts in public policy concerning public space, racial representations and an emerging global market culture. I identify key figures, icons, archetypes, and popular media, circa 1984, and their influence on hip hop aesthetics and discourse.