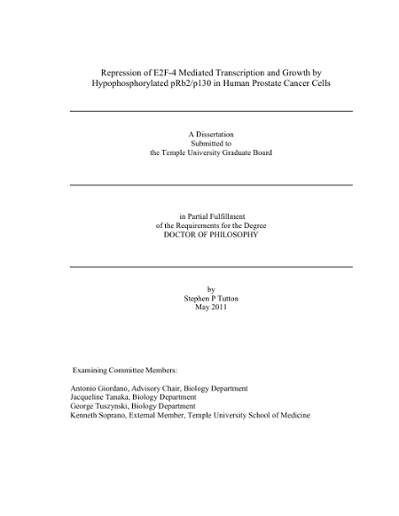 A fundamental property of tumor cells is the ability to proliferate in an unscheduled manner, circumventing the cues which would otherwise prevent entry into, and completion of, the cell cycle (Malumbres, Barbacid 2001). The retinoblastoma protein (pRb), and its homologues pRb2/p130 and p107, comprise a gene family which is central in maintaining appropriate cell proliferation and differentiation. The RB proteins bind to and modulate the activity of E2F transcription factors, by way of a unique binding motif termed the pocket domain; as such, RB family genes are often referred to as pocket proteins. E2F -1, -2, and -3 are considered transcriptional activators and have been shown mainly to bind pRB, whereas E2F -4 and -5 are considered transcriptional repressors, and primarily bind p107 and pRb2/p130 (Classon, Dyson 2001, Cobrinik 2005). The commonly accepted model of pRb2/p130 function is that, during quiescence, pRb2/p130, bound to E2F-4 and -5, is an active repressor of E2F responsive S-phase genes, which includes p107 and a number of cyclins (Figure 1). Upon entry into G1, the many phosphoacceptor sites of pRb2/p130 are progressively phosphorylated, disrupting the repressor complex, and allowing the transcription of downstream targets. pRb2/p130 is acted upon by the same early and late G1 kinases which phosphorylate pRb and p107, namely cyclin dependant kinases (cdk) 4 and 6, which partner with cyclin D, and later by cdk2, which requires cyclin E or A. pRb phosphorylation is required to prevent its inhibition of E2F transcription, which would otherwise halt cell cycle progression. E2F transcriptional activity permits the cell to traverse the G1/S restriction point by, among other effects, promoting cdk2 activity, which maintains pocket protein inactivation and E2F activity in a positive feedback fashion. By interacting with different sets of E2F proteins to repress transcription, pRb and pRb2/p130 act in a parallel manner to restrict cell proliferation (Classon, Dyson 2001, Cobrinik 2005, Bartek, Lukas 2001). Preliminary investigation of pRb2/p130 phosphorylation among individual cell lines grown to confluence revealed significant variation. The pattern observed suggests that, in quiescent cells, the state of pRb2/p130 phosphorylation, and thus its functionality, can vary significantly from one cell type to another. This variance likely has significant consequences on cell phenotype, dependant on the fine balance of upstream kinases and inhibitors which regulate pRb2/p130 activity. Further investigation revealed that prostate cancer cell lines which are judged to be more aggressive also resist contact inhibition, and also that there is a higher degree of pocket protein phosphorylation and E2F gene transcription in these cells. The expression and degree of pocket protein phosphorylation in these prostate cancer cells correlates with malignancy, and may impact E2F-mediated transcription and growth. Despite this increased phosphorylation, the more aggressive prostate cells did not appear to have excessive cdk2 or cdk4 expression or kinase activity. These cells did exhibit a progressive loss of cdk inhibitor (CKI) expression in comparison to less invasive cells, which might explain the greater degree of RB protein family phosphorylation. As a modestly invasive cell line containing abundant, hypophosphorylated pRb2/p130, LNCaP was selected for lentiviral infection with siRNA containing plasmids to generate knockdown subclones. Knockdown of pRb2/p130 resulted in increased E2F-dependant gene expression in these cells, supporting the idea that hypophosphorylated pRb2/p130 did in fact repress transcription in this context. However despite this derepression, a growth advantage was not conferred to these cells by pRb2/p130 knockdown.