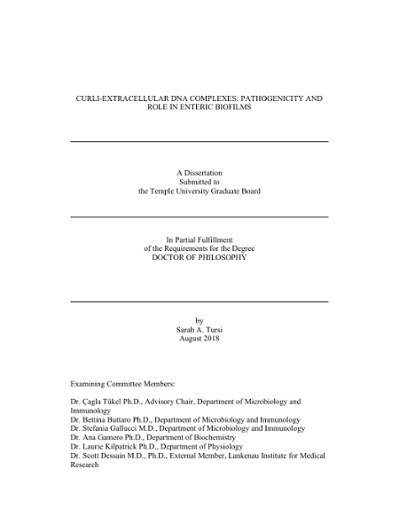 The first recorded observation of bacterial biofilms dates back to the 17th century by Antoine Van Leeuwenhoek. Today, biofilms are known as bacteria encapsulated within a self-produced extracellular matrix adherent to biotic or abiotic surfaces. Since the initial discovery of biofilms, research has explored the structure and function of biofilms. Only until recently has the role of biofilms within the medical setting become apparent. Here, we investigate the role of curli-extracellular DNA (eDNA) complexes in disease pathogenicity and explore the ability to target bacterial amyloid curli as a novel anti-biofilm therapeutic target. Biofilms of enteric bacteria, such as Escherichia coli and Salmonella enterica serovar Typhimurium, are composed of various components that act in consortium to fortify the extracellular matrix. One of the main components of enteric biofilms is amyloid curli. Curli, one of the best characterized bacterial amyloids, is a protein with a conserved cross beta sheet structure that forms basket like structures encapsulating the bacteria. Within the biofilm, curli serves to fortify the extracellular matrix, aids in bacterial attachment and protects bacteria from harsh environmental conditions. Extracellular DNA (eDNA) is another integral component of enteric biofilms. Recent reports from our lab has suggested that curli forms irreversible complexes with eDNA. Even with exposure to DNases, co-localized curli and eDNA can be observed. Other components of enteric biofilms include cellulose and Biofilm Associated Protein A. Biofilms of S. Typhimurium have been associated with significant disease pathologies. In addition to identifying the existence of curli-eDNA complexes within S. Typhimurium biofilms, our lab has also reported that curli-eDNA complexes of S. Typhimurium potentiate the autoimmune disease Systemic Lupus Erythematosus (SLE). SLE is an autoimmune disease characterized by the production of type I interferons and autoantibodies, although the etiology remains unknown. Systemically, curli binds to and activates the Toll like Receptor (TLR)1/2 complex leading to a pro-inflammatory response. In these studies we aimed to identify the innate immune mechanisms leading to the autoimmune phenotype following stimulation with curli-eDNA complexes. As TLR9 is activated by unmethylated bacterial DNA CpG DNA sequences leading to the production of type I interferons we hypothesized a potential role for TLR9 in recognizing eDNA of the curli-eDNA complex leading to the generation of the hallmarks of SLE. To investigate this hypothesis, we stimulated wild-type, TLR2 knockout, TLR9 knockout and TLR2-9 double knockout immortalized macrophages with curli-eDNA complexes purified from S. Typhimurium biofilms. We observed a significant reduction in the transcript level of type I interferons (IFN), Ifnβ, Isg15 and Cxcl10, upon stimulation of TLR2 knockout, TLR9 knockout and TLR2-9 double knockout immortalized macrophages implicating a role in TLR9 recognition of the curli-eDNA complex. As there was a significant reduction of type I interferon levels upon stimulation of TLR2 knockout macrophages, we hypothesized that TLR2 may serve as a carrier to bring the curli-eDNA complex into the endosome containing TLR9. To inhibit phagocytosis, we pretreated cells with endocytosis inhibitors and stimulated wild-type macrophages with curli-eDNA complexes. We observed a reduction in the transcript level of Ifnβ suggesting that curli-eDNA complexes gain access to endosomal TLR9 via TLR2 engagement. Finally, to explore the role of TLR2 and TLR9 in the production of autoantibodies, curli-eDNA complexes were intraperitoneal injected twice weekly for six weeks into C57BL/6 wild-type, TLR2 knockout, TLR9 mutant and TLR2 knockout-TLR9 mutant mice. We observed a robust generation of anti-double stranded autoantibodies within the first three weeks, however the production of autoantibodies was significantly decreased and delayed in the TLR2 knockout, TLR9 mutant and TLR2 knockout-TLR9 mutant mice. Overall, these data suggest that curli acts as a carrier for DNA to elicit an autoimmune response via TLR2 and TLR9. Within biofilms of S. Typhimurium, curli is the main proteinaceous component. Biofilms lacking curli destabilize and fail to form mature biofilms. Recent research has shown that in response to the production of host amyloids, the body will generate anti-amyloid antibodies in the serum. Monoclonal antibodies (mAb) generated from serum antibodies have been shown to have pan anti-amyloid properties in vitro and in vivo due to the β-sheet conformational epitope. As amyloids from both human and bacterial origin share a β-sheet conformational structure, we hypothesized as to if the anti-amyloid mAbs can eradicate S. Typhimurium biofilms by targeting curli. We incubated S. Typhimurium biofilms in the presence of various mAbs (ALZ.4A6, ALZ.4GI, ALZ.2C10 and ALZ.3H3) and observed a significant reduction of biofilm thickness and curli content within the biofilm. We deduced that ALZ.3H3 conferred the greatest anti-biofilm response. When we visualized the three-dimensional architecture of biofilms incubated with ALZ.3H3, we observed that ALZ.3H3 induced the formation of a loose architecture compared to untreated biofilms that were dense and compact. The resulting loose biofilm architecture induced by incubation with ALZ.3H3 enhanced the susceptibility of the biofilms to antibiotic exposure and macrophage clearance. We also observed enhanced biofilm eradication in vivo when catheters precoated with S. Typhimurium biofilms were inserted into the back flanks of mice that were percutaneously injected with ALZ.3H3. Both in vitro and in vivo, combination therapy of ALZ.3H3 and antibiotic enhanced biofilm clearance. In summary, we propose a novel anti-biofilm strategy by targeting the amyloid component of the biofilm, thus satisfying an unmet need in the art of biofilm prevention. Overall, these data in summation significantly broadens our understanding of disease pathogenicity and the role of curli-eDNA complexes in S. Typhimurium biofilms. As amyloid-eDNA complexes may be found in other biofilms, these results may extend beyond enteric bacteria proving novel insight into host-microbe interactions and the generation of novel anti-biofilm therapeutics.