Inflexibility and Vulnerability to Depression 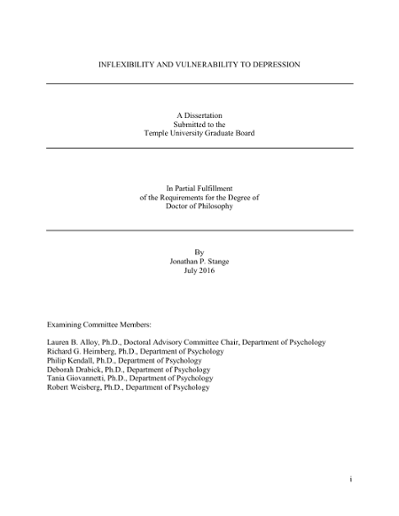 Although existing research has evaluated various cognitive, behavioral, physiological, and environmental risk factors for depression (Johnson, Cuellar, & Miller, 2009), previous studies have typically focused on the content of cognitive styles and coping styles when evaluating vulnerability to depression (e.g., Alloy et al., 2006; Compas et al., 2009). However, recent research has suggested that the ability to flexibly engage in different thoughts, strategies, and behaviors that fit situational demands may be most indicative of psychological health (Bonanno & Burton, 2013; Fresco, Williams, & Nugent, 2006a; Kashdan & Rottenberg, 2010). Existing studies have typically evaluated inflexibilities in isolation without examining commonalities among these factors, and few studies have evaluated inflexibilities as prospective predictors of depression within a vulnerability-stress framework. Thus, the present study was designed to examine (1) which forms of cognitive, behavioral, and psychophysiological inflexibility confer vulnerability to depressive symptoms, particularly when individuals are confronted with life stressors, (2) whether elevations in depressive symptoms prospectively predict decreases in coping flexibility and explanatory flexibility and increases in rumination, and (3) the extent to which explanatory and coping flexibilities are associated with other cognitive, behavioral, and physiological indices of flexibility. A sample of 187 university students completed a multi-wave study, which included a baseline assessment of components of cognitive, behavioral, and autonomic flexibility and symptoms of depression, and four follow-up waves (once every three weeks) assessing the occurrence of negative life events, event-specific explanatory and coping flexibilities, and symptoms of depression. Hierarchical linear modeling was used to test the hypotheses that baseline inflexibilities would predict prospective symptoms of depression, particularly when individuals encountered high levels of negative life events relative to their own mean level of events. Partial support for these hypotheses was found. Deficits in set-shifting predicted greater prospective symptoms of depression. Extreme attributions, brooding, and deficits in cognitive inhibition, autonomic reactivity and recovery interacted with negative life events to predict prospective symptoms of depression. Additionally, elevations in depressive symptoms predicted prospective increases in the use of rumination, but did not predict reductions in explanatory or coping flexibilities. Extreme pessimistic attributions were associated with set-shifting deficits and lack of autonomic flexibility, whereas coping flexibility was associated with greater autonomic flexibility. Overall, the results suggest that assessing components of inflexibility may help to identify individuals who are vulnerable to experiencing depression. They also suggest that enhancing flexibility is a possible mechanism by which interventions (e.g., mindfulness training) may reduce vulnerability to depression.