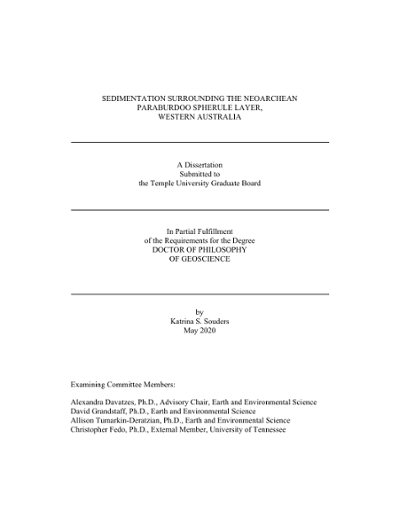 The stratigraphy within the Wittenoom Formation's Paraburdoo Member of the Hamersley Basin in Western Australia has lacked a significant and identifiable marker bed until the recent discovery of the Paraburdoo Spherule Layer (PSL). This 1.5-2 cm thick spherule layer, which was produced by a large bolide impact in the Neoarchean, records more depositional events than presented thus far within the literature. Furthermore, large bolide impacts in the Phanerozoic produced global change identifiable in the post-impact sediments. Aside from a few isolated examples, however, post-impact change associated with Precambrian impacts is sparse. In these studies, we (1) correlate this stratigraphy residing at the three known exposed locations of the PSL within the Hamersley Basin and use these correlations in conjunction with detailed observations and analyses to assess the type of sedimentation recorded by these alternating 'sand' and 'mud' beds. (2) We characterize in detail these same several meters of stratigraphy using the PSL as a distinctive marker bed and add to the existing depositional model of the Hamersley Basin. (3) We use the PSL as a case study to search for impact-induced change in the sediments above the spherule layer. (4) Finally, we investigate microbreccia features surrounding the PSL and outline a new depositional history for the PSL and impact-related strata. We find that the strata surrounding the PSL were not deposited by sediment gravity flows, but rather long-acting deep-marine bottom current(s), the rhythmicity recorded as alternating 'sand' and 'mud' beds is the result of increasing and decreasing current velocities, grain size decreases while mud content increases to the east within the basin, bed thinning occurs to the west within the basin, microbial activity may be recorded in laminations in the finer-grained mud beds present within these strata, and the diagenetic history changes across the Hamersley Basin. We also find possible minor sedimentary changes across the PSL that may be due either to a disturbance by bottom currents or changing diagenetic conditions. Contrary to the trends found with several post-Great Oxidation Event large bolide impacts, we find no evidence of shifts in tectonic regime, sediment deposition, paleoenvironment, or weathering induced by the PSL impact, for which the impactor has been estimated to be approximately three times larger than that of the K-Pg boundary layer. This lack of weathering may be due to one or both of the following hypotheses: either the PSL's deposition in several-hundred-meter-deep water within the Hamersley Basin of Western Australia caused the water to act as a buffer against such changes, or the Neoarchean's high-CO2 atmospheric composition acted as a threshold below which introducing more impact-produced gases would not have produced the expected climatic and weathering changes. We also report higher iron and arsenic concentrations in the sediments immediately above the PSL as well as distinctive layers of hematite nodules bracketing the spherule layer. These geochemical changes may record ocean overturn of the Neoarchean stratified water column, which brought slightly oxygenated waters to depth, and/or heating of the global oceans by tens to hundreds of degrees Celsius in the wake of the PSL impact. Either or both of these mechanisms in addition to impact-induced shallow-water ocean evaporation may have caused a massive die-off of microbes, also producing a post-impact increase in iron and arsenic concentrations. Finally, we find that the PSL is bracketed by thin layers of microbreccia. The microbreccia layer underlying the spherules contains K-phyllosilicate mud clasts, detrital quartz grains, iron oxide grains and nodules, mud aggregates, and muddy areas within carbonate interstitial material. This underlying layer formed via debris flow or possible bottom-current flow before the PSL spherules fell through the water column. Afterwards, meteoritic dust from the impact along with sediment suspended in the impact-mixed water column settled out on top of the spherules. The pressure of the spherules and overlying mud on top of the underlying microbreccia layer caused the microbreccia to pipe upwards, pooling out on top of the spherules, forming an overlying microbreccia layer. Additional impact-related microbreccia features occur at only one of the three PSL deposition sites, including microbreccia-filled dikes in the strata below the PSL and further water escape features upward through the strata above the PSL, suggesting differential diagenesis or local variability between the three exposed PSL sections. Carbonate, iron oxide, and silica precipitation within the microbreccia layers likely occurred during diagenesis.