ESSAYS ON BANKING MERGERS AND ACQUISITIONS 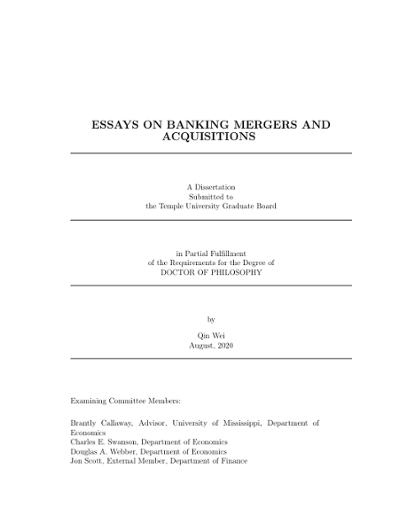 This dissertation includes three chapters which are three papers on banking mergers and acquisitions. Bank failure and bank takeover are major risks which cause a bank to cease to exist, and Chapter 1 focuses on analyzing the factors which indicate bank takeover target vs. bank failure. The target banks would be integrated into acquiring banks, and the performance of the acquiring banks may change post the takeovers. Therefore Chapter 2 focuses on the impact of bank acquisition on the acquiring bank in the U.S.. Chapter 3 focuses on the prediction field and compares two different methodologies (multinomial logistic regression and machine learning method of XGBoost) on the prediction of bank failure or takeover. Chapter 1, titled FACTORS THAT INDICATE BANK TAKEOVER TARGET VS. BANK FAILURE, analyzes the mergers and acquisitions data for the US banking industry from 2001 to late 2015, using both multinomial logistic method and competing risk proportional hazard method, to see how the financial ratios and bank specific features affect the risk of bank failure, bank takeover by a correlated bank under the same ultimate parent bank holding company, and bank takeover by an independent bank with a different ultimate parent bank holding company. This chapter also analyzes the characteristics of failed banks and the target banks in different stages in the financial economic cycle. The results show that the failed banks or the banks which were taken over by independent banks have lower capital ratio, higher real estate loan ratio and commercial and industrial loan ratio, higher non-performing loan ratio, lower after tax profit ratio, higher operating profit ratio, higher liquidity ratio, younger age and smaller asset growth ratio than the baseline banks which continue to operate as usual during the through the cycle period. One notable difference between these two risks is that failed banks tend to be of bigger size, while the acquired banks tend to be of smaller size. Banks which were taken over by correlated banks exhibit higher equity ratio, higher commercial and industrial loan ratio, lower after tax profit ratio, lower liquidity ratio, bigger size, smaller asset growth ratio and younger age compared to the baseline banks which continue to operate as usual during the through the cycle period. The results show the three risk events are subject to some extent of sensitivity to different stages in the financial economic cycle, with the risk of bank takeover by a correlated bank has most sensitivity. The results also show there is small sensitivity observed for the factors indicating the three risks to the methodology utilized. Chapter 2, titled IMPACT OF BANK ACQUISITION ON THE ACQUIRING BANK IN THE U.S., focuses on the merger and acquisition activities in the U.S. banking industry between 2003 and 2014 and analyzes the data to see the effects of the merger and acquisition on the acquiring banks' performance post the event. This chapter selects performance measures of financial ratios implied in CAMEL measure, uses both group time difference-in-difference method and quantile difference-in-difference method to see the impacts. The results show that not all the financial ratios have been significantly impacted by the merger and acquisition, and the impacts show some variations depending on which stages in an economic cycle the mergers and acquisitions are conducted in. Equity ratio, commercial and industrial loan ratio, delinquent assets ratio, non-performing assets ratio and return on equity ratio show significant impact from the mergers and acquisitions for all the three stages across the economic cycle. The results also show that there are variations of merger and acquisition effects on the performance measures depending on whether they are in high end or low end of their distributions. Chapter 3, titled PREDICTION OF U.S. BANK STATUS USING MACHINE LEARNING VS. MULTINOMIAL LOGISTIC REGRESSION, compares multinomial logistic regression methodology with machine learning method of eXtreme Gradient Boosting (XGBoost), to see which methodology can give better prediction on two types of risk events faced by U.S. banks, namely bank failure and bank takeover, using the features consisting of financial ratios on the data from 2002 to 2014. This paper also compares the most important features in each methodology. Beyond that, this paper explores SHapley Additive exPlanations (SHAP) analysis to interpret how bank features influence these two types of risk events from XGBoost method. The results show that XGBoost method gives better prediction accuracy if both developing the model and evaluating the performance on the whole length of US banking mergers and acquisitions data from 2002 to 2014, but the outperformance of XGBoost method is not obvious if developing the model in restricted in-sample data (from 2002 to 2010) and evaluating the performance using the out-of-sample data (from 2011 and 2014). Both two methodologies can give better prediction accuracy on the risk of bank failure than the risk of bank takeover. In addition, the most important features from XGBoost method and multinomial logistic regression method are highly aligned, with non-operating expense ratio, net after tax income ratio, equity ratio, non-performing asset ratio are the top important features. Finally, the SHAP analysis on XGBoost model shows that the features contribute to the targeted risks in a non-linear way.