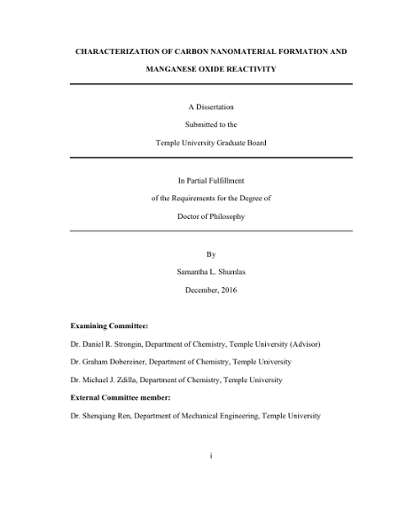 Characterization of a material’s surface, structural and physical properties is essential to understand its chemical reactivity. Control over these properties helps tailor a material to a particular application of interest. The research presented in this dissertation focuses on characterizing a synthetic method for carbon nanomaterials and the determination of structural properties of manganese oxides that contribute to its reactivity for environmental chemistry. In particular, one research effort was focused on the tuning of synthetic parameters towards the formation of carbon nanomaterials from gaseous methane and gaseous mixtures containing various mixtures of methane, argon and hydrogen. In a second research effort, photochemical and water oxidation chemistry were performed on the manganese oxide, birnessite, to aid in the remediation of arsenic from the environment and provide more options for alternative energy catalysts, respectively. With regard to the synthesis of novel carbonaceous materials, the irradiation of gaseous methane with ultrashort pulse laser irradiation showed the production of carbon nanospheres. Products were characterized with transmission electron microscopy (TEM), scanning electron microscopy (SEM), ultraviolet (UV) Raman spectroscopy, and infrared spectroscopy. Increasing the pressure of methane from 6.7 to 133.3 kPa showed an increase in the median diameter of the spheres from ~500 nm to 85 nm. Particles with non-spherical morphologies were observed by TEM at pressures of 101.3 kPa and higher. UV Raman spectroscopy revealed that the nanospheres were composed of sp2 and sp3 hybridized carbon atoms, based on the presence of the carbon D and T peaks. A 30% hydrogen content was determined from the red shift of the G peak and the presence of a high fluorescence background. Upon extending this work to mixtures of methane, argon, and hydrogen it was found that carbon nanomaterials with varying composition and morphology could be obtained. Upon mixing methane with other gases, the yield significantly dropped, causing flow conditions to be investigated as a method to increase product yield. Raman spectra of the product resulting from the irradiation of methane and argon indicated that increasing the argon content above 97% produced nanomaterial composed of hydrogenated amorphous carbon. In a second research effort, the effect of simulated solar radiation on the oxidation of arsenite [As(III)] to arsenate [As(V)] on the layered manganese oxide, birnessite, was investigated. Experiments were conducted where birnessite suspensions, under both anoxic and oxic conditions, were irradiated with simulated solar radiation in the presence of As(III) at pH 5, 7, and 9. The oxidation of As(III) in the presence of birnessite under simulated solar light irradiation occurred at a rate that was faster than in the absence of light at pH 5. At pH 7 and 9, As(V) production was significantly less than at pH 5 and the amount of As(V) production for a given reaction time was the same under dark and light conditions. The first order rate constant (kobs) for As(III) oxidation in the presence of light and in the dark at pH 5 were determined to be 0.07 and 0.04 h−1 , respectively. The As(V) product was released into solution along with Mn(II), with the latter product resulting from the reduction of Mn(IV) and/or Mn(III) during the As(III) oxidation process. Experimental results also showed no evidence that reactive oxygen species played a role in the As(III) oxidation process. Further research on the triclinic form of birnessite focused on its activation for water oxidation. Experiments were performed by converting triclinic birnessite to hexagonal birnessite in pH 3, 5, and 7 DI water with stirring for 18 hrs. Once the conversion was complete, the solid samples were characterized with TEM and x-ray photoelectron spectroscopy (XPS). The resulting hexagonal birnessites from experiment at pH 3, 5, and 7 possessed the same particle morphology and average surface oxidation states within 1% of each other. This observation supported the claim that upon transformation, Mn(III) within the sheet of triclinic birnessite migrated into the interlayer region of the resulting hexagonal birnessite. Furthermore, the migration of Mn(III) into the interlayer and formation of the hexagonal birnessite led to an increased chemical reactivity for water oxidation compared to the bulk. Electrochemical studies showed that the overpotential for water oxidation associated with the pH 3, 5, and 7 samples was 490, 510, and 570 mV, respectively. In another set of experiments, ceric ammonium nitrate was used to test birnessite for water oxidation reactivity. These experiments showed that the pH 3 birnessite produced the most O2 of all the samples, 8.5 mmol O2/mol Mn, which was ~6 times more than hexagonal birnessite which did not undergo post-synthesis exposure to low pH conditions.