In the Margins or the Mainstream? Gay and Lesbian Narratives About Urban Space, Place, and Community in Everyday Life 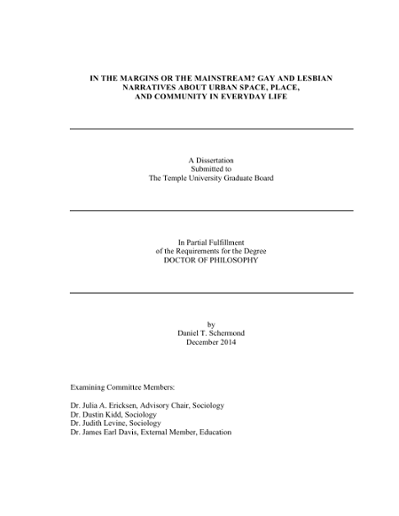 In this dissertation, I analyze narratives about how gays and lesbians think about urban space and communities in relation to their sexual identities. My research addresses discussions about assimilation and acceptance of gays and lesbians into U.S. culture and the residential departure of LGBTQ communities from enclaves characterize by the late 20th century. I also consider the extent to which gay and lesbian adults have move beyond experiences of living in the "closet." Have gays and lesbians entered the urban mainstream, or are they still relegated to the margins? To answer this, I asked three other main questions. First, I asked if sexual identity was still considered to be an important part of decision making processes for those who identified as gay and lesbian, and if so how this influenced choices about urban space use. Second, under the hypothesis that sexual identity was still a factor in decision making regarding urban space, I asked if there were any differences for gays and lesbians with various intersectional identities. Given that we know other factors like gender, race, class, and family can influence these choices for most people, I wanted to determine if such factors played a role in these experiences. Third, and specific to the site of my research, I asked what places in Philadelphia held meaning for gays and lesbians with regard to their sexual identities and sense of community. I identified two main narrative themes that described how gay and lesbian people thought about and made decisions about occupying different places in Philadelphia. The first I refer to as the "assimilation narrative," which represents cultural acceptance and residential integration into mixed populations. The second narrative is what I refer to as the "marketplace narrative," which is based on the idea of maximizing the chances of finding compatible partners in the city, as well as the social ties and resources that come with participation in these social markets. I found that my participants employed both types of narratives, but assimilation narratives were much more common when talking about residential decisions, while marketplace narratives were dominant in a discussion of a symbolic and ambient LGBTQ community. The process of finding and participating in a sexual marketplace was facilitated by the prominent, visible Gayborhood district in the city. This was described as a place that was symbolically linked with the ambient LGBTQ community, and participants could typically rely on these to represent them and to provide opportunities to find marketplaces regardless of where they lived. Those with multiple marginalized identities, especially women and people of color, more often felt unable to rely on the Gayborhood to facilitate this process. These participants described difficulty feeling as if they belonged in many of the places there, which they often viewed as more representative of white, gay men. People in these groups frequently put more work into the process of finding or creating marketplaces for themselves. Assimilation narratives were much more common when discussing residential choices, since participants could often rely at least partially on the ambient community and visibility of the Gayborhood for marketplaces. Residential choices involved sexuality-related considerations, though narratives about this process were typically described as a way of avoiding unfriendly neighborhoods and minimizing safety risks rather than choosing to live in proximity to other gays and lesbians. Participants referenced 11 neighborhood areas as those most friendly or comfortable for gays and lesbians, and most of them lived among these areas. Those who did not live in these neighborhoods discussed the additional work they did to manage their identities and marketplace ties in relation to the other factors that outweighed sexuality. Assimilation narratives were less relevant when discussing living places like unfriendly neighborhoods and workplaces, and narratives about being in or out of the closet sometimes resurfaced there. Some groups were also described as uninterested in assimilation, and some participants struggled with balancing radical politics and the benefits of assimilating. My findings in this research are based on the qualitative analysis of 54 semi-structured interviews with adults identifying primarily as gay, lesbian, queer, and who identify themselves as being primarily interested in same-sex relationships. This group represented whites and people of color evenly, slightly more women than men, and people across a range of ages from 18 to 58 years. People with and without children were both represented in the sample. I also conducted a brief ethnography of the 11 neighborhoods most often associated with the dominant narrative themes. I present descriptive data profiles on these neighborhoods drawing on data from the 2010 U.S. Census and 2008-2012 American Community Survey estimates. In Chapter 1, I provide an introduction to this topic and my specific research questions and findings, as well as an overview of the theoretical framework and methods I used. In Chapter 2, I provide a historical perspective on gay, lesbian, and LGBTQ communities and neighborhoods both generally and in Philadelphia. In Chapter 3, I discuss the "Gayborhood," a downtown district that visibly and symbolically represented the LGBTQ community in this city. In Chapter 4, I explore how those with intersecting marginalized identities often failed to experience an inclusive marketplace in these supposedly shared spaces. I also discuss work these groups sometimes did to gain access to spaces that they could utilize to create a sense of place, shifting between assimilation and marketplace narratives. In Chapter 5, I discuss participants' choices to live in neighborhoods other than the Gayborhood, and how assimilation narratives involved identity management work in negotiating factors like family, economics, and safety in relation to sexual identity in these neighborhoods. In Chapter 6, I talk about how gays and lesbians drew upon social networks and technology when finding gay, lesbian, and queer places both in Philadelphia and when traveling. In Chapter 7, my concluding chapter, I address the limitations of this particular research, the possibilities for future research based on the findings of this work, and implications for both LGBTQ communities and individuals in thinking about who among us is being left in the margins of society while others among us find our paths into the mainstream.