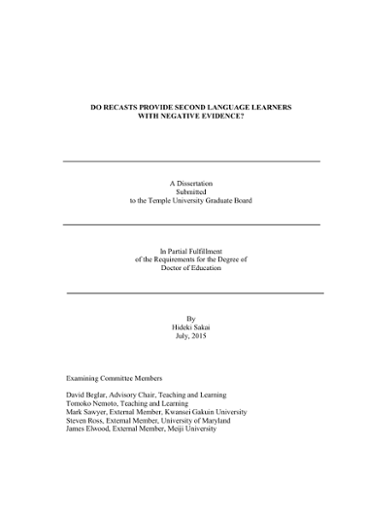 The purpose of this experimental study is to examine the effects of recasts on narrowing overgeneralized grammar in the second language (L2). The study involved testing three major hypotheses of the mechanisms underlying recasts: the direct contrast hypothesis (Saxton, 1997, 2000), the additional input hypothesis (Gass, 1997; Gass & Mackey, 2007; Long, 1996, 2007), and the enhanced salience hypothesis (Leeman, 2003). Two structures (adjective ordering and indirect passives) were selected for this study, mainly because it was assumed that Japanese learners of English might produce overgeneralized rules that allow incorrect structures because of their first language (L1) influence. The participants were 97 Japanese university students learning English as a foreign language in Japan. They were randomly assigned to four treatment groups: recast (the REC Group), non-contingent positive evidence (the POS Group), recast plus additional input (the REC+ Group), and input with enhanced salience (the SAL Group). A pretest, posttest, and delayed-posttest design were employed. The measurement instruments were an oral production task, elicited imitation task, and untimed grammaticality judgment task, each of which was designed to elicit participants’ implicit and explicit knowledge about adjective ordering and indirect passives. Thus, the independent variable was the treatment conditions, and the dependent variable were the test scores regarding ungrammaticality of the overgeneralized rules of the target structures. After data screening, the data from 75 of the 97 participants were analyzed for adjective ordering, and the data from 90 participants were analyzed for indirect passives. The results showed that the POS Group did not improve on all the measures for adjective ordering and indirect passives; thus, it was suggested that positive evidence was not sufficient for the participants to narrow overgeneralized rules for the target structures. The findings indicated that for adjective ordering, medium effect sizes for the comparison of the POS and REC Groups were obtained on the grammaticality judgment tests for the pretest-posttest and pretest-delayed posttest comparisons. Thus, based on these effect sizes, the direct contrast hypothesis was partially supported (i.e., for one of the two structures and one measure of the three tests). Furthermore, on the basis of the results that the REC and REC+ Groups did not differ significantly on any measure and that on the adjective-ordering grammaticality judgment tests, the comparison between the REC+ Group and the POS Group obtained a medium effect size for the pretest-delayed posttest comparison, the provision of recasts in the REC and REC+ Groups was effective at least for the adjective-ordering grammaticality judgment tests; however, additional input alone did not have an impact on L2 learners’ retreat from the overgeneralized rules. Finally, the results showed that the POS and SAL Groups did not differ significantly and that there existed a difference in the performance on the adjective-ordering grammaticality judgment tests between the REC Group and the SAL Groups. Salience might not be effective in helping L2 learners retreat from overgeneralized rules, and the enhanced salience hypothesis can be interpreted as being limited to learning some linguistic structures. In conclusion, the present study provides empirical evidence that L2 learners can persist in using incorrect overgeneralized rules due to L1 rules and that ten tokens of the target structures are not effective for L2 learners to retreat from the overgeneralized rules. Furthermore, the findings lend support to the direct contrast hypothesis as a mechanism underlying recasts for one of the two target structures.