National Narratives and Global Politics: Immigrant and Second-Generation Iranians in the United States and Germany 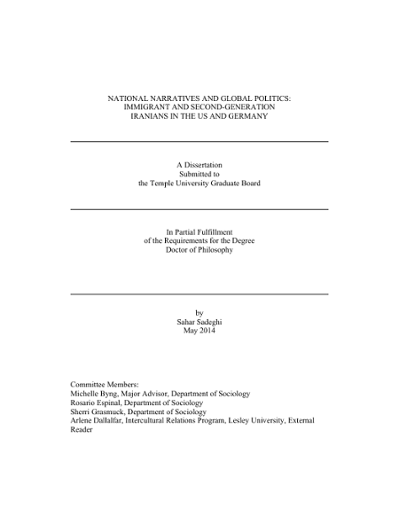 This dissertation project examines the lived experiences of immigrant and second- generation Iranian immigrants to uncover the factors that shape their perceptions of belonging in two differ western nations. It is a qualitative methods study that utilized in-depth interviews. I address the limitations of past research by highlighting that Iranians' experiences of belonging and membership in western nations are greatly influenced by the national narratives of their host societies and the global politics surrounding Iran. My central research questions are: How do America's and Germany's national narratives of immigration influence Iranians' sense of belonging? and How do Iranians perceive the global politics surrounding Iran as impacting their lives in the West? Research on Iranians in the United States and Europe underscores Iranians' proclivity to become entrepreneurs in their new nation, the lack of solidarity and community among Iranians, and the discrimination that they experience due to their ethnic and religious identities. However, we lack comparative scholarship that examines Iranian immigrants' experiences in two nations where the national narratives are different. Moreover, there is an absence of research that addresses whether, and how, global politics influence perceptions of belonging. The three empirical chapters examine the data from sixty-four in-depth interviews with immigrant and second-generation Iranians living in northern and southern California, and Hamburg, Germany. In the first interview data chapter, I examine the motivations of Iranians' migration to the US and Germany, their settlement experiences, and their expectations of their lives in their new nation. Specifically in this chapter, I reveal that the lack of foreign policy considerations for post-Revolution Iranian exiles in the US and the institutionalized nature of refugee policy, and lack of it, in each nation helps explain the varying settlement experiences of immigrant-generation Iranians in the US and Germany. It is noteworthy that these experiences also helped shape Iranians' understanding of each nation's main values and characteristics. In the second empirical chapter, I show that national narratives of immigration are important in shaping Iranian immigrants' understandings, expectations, and experiences of belonging and membership in the US and Germany. These narratives inform their interpretations of not just the prospects of belonging, but the indications of whether they have accomplished it. In the last data chapter, I explore how Iran's global political standing influences the lives of Iranian immigrants living in the US and Germany. In both the US and Germany, the dominant negative discourse surrounding a highly politicized homeland stigmatizes Iranians' identities, and makes them more subject to experiences of marginality and discrimination. Specifically, in the US, global politics puts a cap on Iranians' quality of middle class experiences, and facilitates the construction of social marginality and discrimination against them. In Germany, it helps solidify a boundary that is already there. Ultimately, this dissertation research uncovers three important aspects in regards to perceptions of belonging among Iranians in the US and Germany: First, a comparison of Iranian immigrant experiences in two western nations where the narratives of belonging are considerably different demonstrated that the national narratives of an immigrants' host society greatly shape and mediate perceptions and experiences of belonging and membership. Specifically in the US, Iranians perceive belonging when they can obtain opportunities for social mobility, when their ancestry is not marked or stigmatized, and when they can place themselves in the `nation of immigrants' narrative. In Germany, Iranians perceive that they can come close to belonging once they are perceived as having culturally accommodated to German society, can access greater opportunity structures, and are perceived and accepted as `good foreigners and immigrants'. Second, an examination of how global politics surrounding Iran impact Iranians' lives in western nations revealed that their identities are stigmatized; they encounter marginality and exclusion, and ultimately feel that they do not belong or have full membership in the US and Germany. Interestingly, Iranians in both nations hypothesized that an improved Iranian standing would help facilitate belonging and membership. What is more, their perceptions of how their lives would change, and how belonging would take shape, if they did not live with the stigmas created by Iran's global politics, were inextricably linked to the national narratives of their host societies. Third, there were significant generational differences in how the second-generation in each nation assessed belonging. In the US, the second-generations' ability to access the educational resources needed for professional careers, despite their perceptions of the existence of anti-Iranian prejudice, legitimized both the US national narrative and proved to them that they can secure a good quality of life and be a part of US society. In Germany, the second generation experienced generational lag with regard to belonging. Their ability to belong is not resolved by length of residence, German citizenship, German educational attainments, or their adherence German cultural norms and practices. Rather, second generation believed that being marked as foreigners was perpetual, and not an identity that one loses after a few generations. Ultimately, among the US second-generation US sample there were more significant/powerful declarations of the ability to acquire social mobility and belonging, while those in Germany experienced a more generalized feeling of not belonging. This research contributes to ongoing conversations regarding immigrant belonging and membership. It adds the comparative dimension of belonging and membership by examining evaluations of belonging in two western nations where the national narratives are different. Furthermore, it takes into account how the contentious and antagonistic political relationship between Iran and western nations has impacted Iranians' lived experiences, and ability to belong, in the US and Germany. Ultimately, the inclusion of national narratives and global politics contributes to our understanding of the sociological processes that facilitate, and disrupt, experiences of immigrant belonging and membership in their host society, and provides us with a deeper understanding of the layered and complex dynamics that shape immigrant experiences.