Interactions between the axon tip and its environment in regulating neuronal survival and axon regeneration: roles of the CSPG receptor, PTPσ, and delayed axolemmal resealing. 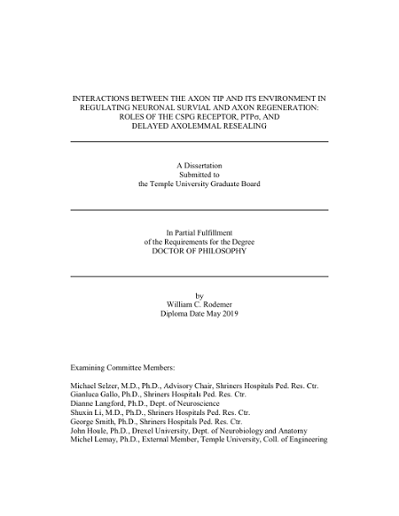 Human spinal cord injury (SCI) results in persistent functional deficits as damaged axons in the mature central nervous system (CNS) fail to regenerate after injury. This is due to both growth-inhibiting compounds, e.g., the myelin-associated growth inhibitors and the chondroitin sulfate proteoglycans (CSPGs), in the extracellular environment, and growth-limiting intrinsic factors. Unlike mammals, the primitive sea lamprey robustly recovers swimming and other locomotor behaviors after complete spinal cord transection (TX), despite the presence of homologues of the mammalian growth-inhibiting molecules. This recovery is accompanied by heterogeneous anatomical regeneration of the reticulospinal (RS) system, which, in lampreys, is the dominant descending pathway for motor control. Within the RS system, there are 18 pairs of identifiable neurons that can be classified as “good” or “bad” regenerators based on the likelihood that their axons will regenerate beyond the TX site. Most bad regenerators undergo a delayed form of caspase-mediated cell death. Because both good and bad regenerators project through the same extracellular environment, investigating their divergent responses to axotomy has the potential to reveal the key intrinsic properties that regulate axon regeneration. And, since lampreys share much of the same CNS organization and signaling pathways with higher order mammals, regeneration mechanisms discovered in lampreys may be useful therapeutic targets in humans with SCI. Lampreys do not express myelin, so the CSPGs probably form the principal extracellular inhibitory component of the injured spinal cord. Mammalian in vitro and in vivo studies suggest that CSPGs bind the LAR-family receptor protein tyrosine phosphatases (RPTPs), PTPσ and LAR, leading to growth inhibiting cytoskeletal remodeling and reduced activity of pro-survival pathways via the small GTPAse, RhoA. Intriguingly, preliminary in situ hybridization experiments with antisense riboprobes revealed that PTPσ is preferentially expressed on bad regenerator neurons. Thus, we hypothesized that differential PTPσ expression may be a key signaling determinant of regeneration. Using antisense morpholino oligomers (MOs) applied to the proximal spinal cord stump immediately after TX, we inhibited PTPσ expression among lamprey RS neurons and assessed its effects on regeneration. Contrary to our hypothesis, PTPσ deletion did not promote supraspinal regeneration or enhance behavioral recovery. Most surprisingly, we observed reduced survival of RS neurons at long timepoints post-TX among the PTPσ knockdown cohort. Western blot analysis, using pan-LAR-family receptor antibodies, indicated that the PTPσ knockdown did not affect expression of other LAR-family receptors. Although these results are the opposite of what we expected, there are several potential biological explanations that may explain why the loss of PTPσ antagonizes survival. Notably, these include interactions with the pro-regenerative PTPσ ligands, heparin sulfate proteoglycans (HSPGS), exacerbation of inflammatory processes, reduced synaptogenesis leading to loss of trophic support, and potentially off-target toxicity. These explanations remain under investigation. Notably, pilot studies involving HSPG digestion using bacterial heperainase III did not recapitulate the knockdown phenotype. Following the surprising results of PTPσ knockdown, we stepped back and considered whether simpler factors between good and bad regenerators may contribute to their divergent response to axotomy. We had long noted that bad regenerators tended to be larger than good regenerators, but generally believed this was an epiphenomenon unrelated to axon regeneration. However, a careful reexamination of primary and historic data uncovered an even stronger inverse correlation between soma cross-sectional area and regenerative ability (r = -0.92) than we had suspected. Using a similar approach, we determined that RS neuron soma size is proportional to axon caliber. Because large axons may reseal more slowly following axotomy than smaller axons, we hypothesized that inefficient axolemmal resealing after axotomy may be a key driver of the degenerative processes observed among bad regenerators. Using dye exclusion assays with 10,000 MW fluorescent dextran tracers, we assessed the rate of axolemma resealing for each of the identifiable neurons. Within 2 hours of TX, 75% of axons from small to medium sized neurons (≤ 20 x102 µm2; B5, I3, I5, mth’, M4, B6, I4, I6, M1, B2, I2) were impermeable to dye compared to only 5% of axons from the larger bad regenerator RS neurons (B1, M3, M2, B4, Mth, B3, I1). Indeed, many of these large bad regenerators remained permeable to dextran dye for more than 24 hours after injury. Importantly, approximately 65% of neurons with axons that remained dye permeable at 24 hours post-TX were positive for active caspases at +2 weeks, compared to only 10% of neurons with sealed axons (p&lt;0.0001***). When axon resealing was artificially induced with the fusogen, polyethylene glycol (PEG), caspase activation was inhibited, suggesting that slow axolemma causatively promotes degeneration among lamprey RS neurons. Although this study did not investigate the underlying mechanisms, we suspect that prolonged influx of toxic mediators in the extracellular environment, particularly calcium, may drive the degenerative response. Together, these results demonstrate that axon regeneration and cell survival after spinal cord TX is a complex process strongly shaped by the intrinsic characteristics of the neurons themselves. Selective expression of putative inhibitory or pro-growth molecules may regulate the regeneration process in ways that can be difficult to predict a priori and with effects that vary among taxa. Because lampreys are one of the few vertebrates to recover after complete SCI, they remain an essential model organism to study true axon regeneration in the CNS.