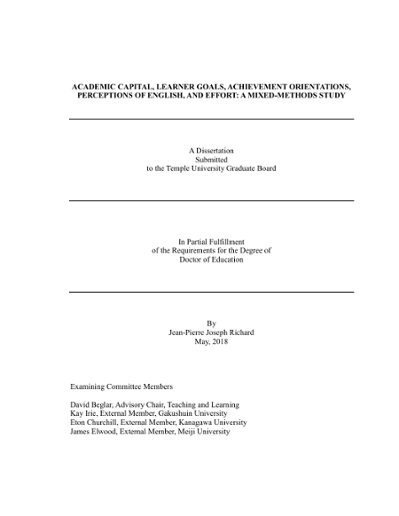 This exploratory study investigated variables that have received scant attention in the field of second language acquisition. Four research questions were addressed concerning academic capital, achievement orientations, efforts to learn English, and perceptions of the impact of globalization on English. A fifth research question tested these variables in a model of language learning. The final research question investigated the participants L2-English goal stability over one academic year. The longitudinal study used a mixed-methods, QUAN+qual approach. The primary group of participants (n = 748) were Japanese postsecondary students from 12 institutions. To address the first five research questions, data were gathered with questionnaires and vocabulary tests at three intervals in one academic year. A secondary group of participants, the Goal-Setting group (n = 192), was composed of participants from seven institutions. To address Research Question 6, written responses were collected on three occasions from the Goal-Setting group. Lastly, there were two interview groups, a Student Group (n = 16) and a smaller group, the Worker Group (n = 5), was composed of young Japanese adults who had never attended university. Data from the interviews were used to provide additional insight into several factors in this study. For Research Question 1, the quantitative data results revealed differences on certain components of Academic Capital between participants at different institutions, and no differences on other components. For example, there were large differences found on Family Aspirations and Family Background but no differences found on Study Behaviors. The interview data revealed more striking unequal disparities, in particular on Family Background and School Experiences. Differences in family background likely account for large disparities in educational opportunities, both past and present, and point to potentially uneven futures. For Research Question 2, the results revealed that the four-factor structure of Achievement Orientations at each time interval was similar to previous research; however, rank order and stability of the orientations were different from previous results. In particular, unlike previous research with students in math and psychology classes, Performance-Approach and Performance-Avoidance orientations were generally higher and more stable. These results might need to be considered in light of the important gatekeeping role that language tests play in Japan. For Research Question 3, the results for the Perceptions of the Impact of Globalization on English Survey revealed two factors related to an instrumental, career-related factor and an intrinsic, contact-related factor. These findings connect with contemporary discourses regarding the role of English and with findings from earlier motivational research in Japan. Participants at female-only institutions generally had higher scores than participants at co-educational institutions. This latter finding might be viewed in relation with the way English is marketed in Japan. For Research Question 4, the results revealed that Efforts to Learn English are multidimensional; however, in previous L2-motivational research, the dimensionality of items representing different temporal efforts was not investigated. Participants at female-only institutions generally scored higher on Past Efforts and Present Efforts than participants at co-educational institutions. In all, these findings suggest that greater care needs to be taken when operationalizing Efforts to Learn English. In addition, gender differences need to be explored further. For Research Question 5, the measurement models were generally acceptable; however, the structural equation model testing the paths between the above exogenous variables and vocabulary scores did not perform well. Even though few paths in the final model were found to be significant, the findings add to body of literature in SLA and introduce new concepts to our field. Finally, for Research Question 6, the analyses revealed four goals that were most frequent and stable. These goals relate to using English, English for tests, English for going abroad, and English for career. Learners with the latter instrumental goal had the largest vocabulary sizes, and career goals correlated with many other variables in this study. The strength of career goals should be considered in relation to current motivational theories in SLA.