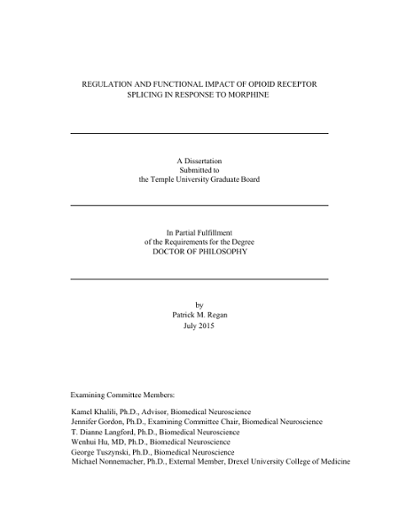 Multiple classes of pharmaceuticals, including acetaminophen, aspirin, and other nonsteroidal anti-inflammatory drugs (NSAIDs), are used to relieve mild to moderate pain; however, one of the oldest classes of pharmaceuticals, opioids, remains the primary class of drugs used in the management of severe pain. For decades, the unique pharmacological profiles of opioid compounds have suggested the existence of multiple opioid receptor subtypes and, accordingly, four opioid receptors have been cloned to date; the mu (μ)-opioid receptor, the kappa (κ)-opioid receptor, the delta (δ)-opioid receptor, and the nociceptin/orphanin FQ receptor. Additionally, each receptor is encoded by its own distinct gene; the OPRM1, OPRK1, OPRD1, and OPRL1, respectively. Despite the identification and characterization of these four opioid receptor subtypes, pharmacological data, particularly from opioid receptor knockout mice, does not conform to the predications of a four opioid receptor model and instead suggests the existence of additional receptor subtypes. Additional opioid receptors have since been proposed but corresponding genes have either been unidentified or found to be genetically unrelated. Interestingly, this problem is not unique to opioid receptors, as there is a large discrepancy between the number of protein encoding genes and the repertoire of mRNA transcripts and encoded proteins they produce, with gene products far more numerous than estimates would predict. It is now understood that this discrepancy is due to the generation of multiple RNA transcripts from a single gene. Several mechanisms are utilized in order to generate mRNA transcript variants, or isoforms, from a single gene; however, the primary mechanism, known as alternative splicing, involves a complex macromolecular machine, referred to as the spliceosome, through which specific portions of the precursor mRNA (pre-mRNA) sequence are selectively removed and the remaining nucleotide sequences are ligated to form a unique mRNA transcript. Recently, multiple opioid receptor isoforms, particularly for the μ-opioid receptor, have been identified; however, both their regulation and their functional significance are poorly characterized. As such, multiple studies are needed to more precisely describe alternatively spliced μ-opioid receptor isoforms, particularly the regulation of spliceosome components that determine the splicing specificity of particular isoforms as well as the distinct signaling pathways utilized by particular isoforms both constitutively and following agonist binding. Using a model of dopaminergic neurons, this study sought to examine these questions and found that expression of a particular splice variant, MOR-1X, was up-regulated by morphine through a mechanism involving the essential splicing factor ASF/SF2. Structural comparison of this isoform to the prototypical variant MOR-1 found that the unique distal portion of C-terminal domain contains two additional PKA phosphorylation sites as well as a second agonist-induced phosphorylation motif highly conserved among opioid receptors. Functional comparison of MOR-1 and MOR-1X found distinct signaling differences, both constitutively and following morphine treatment, in MAPK signaling cascades, particularly ERK1/2. While the pharmacological significance of MOR-1X expression and signaling remains unclear, the clinical importance of this finding extends beyond a mechanism of opioid analgesic variability, as the physiological roles of opioids also include immunomodulation and have been implicated specifically in the exacerbation of HIV viral replication and pathology, particularly neurocognitive dysfunction. Accordingly, the HIV viral protein Tat was found to block morphine-mediated increases in MOR-1X expression by similarly blocking morphine-mediated increases in ASF/SF2 expression. Consequently, MOR-1X and HIV viral proteins were found to have a unique and synergistic role in the regulation of intrinsic apoptotic signaling cascades, specifically Bax expression, and in cell proliferation. Therefore, the regulation of alternative splicing events by both opioids and HIV viral proteins involves, in part, the inverse regulation of ASF/SF2 protein expression, through which the expression of the MOR-1X isoform is subsequently and significantly altered. This, in turn, may lead to functional consequences in opioid pharmacokinetics as well as in opioid-related pathology, such as the exacerbation of HIV associated neurocognitive dysfunction, as MOR-1X contains unique functional regions which may be responsible for the observed differences in MAPK and intrinsic apoptotic signaling and cellular proliferation. Collectively, these findings support previous studies that suggest alternative splicing of the MOR is altered by exogenous factors, such as morphine and HIV, identify unique signaling pathways for various opioid receptor isoforms, and are the first to suggest a potential mechanism through which pharmacological interventions could be utilized to alter opioid receptor isoform expression, thereby altering the pharmacological and physiological effects of opioids.