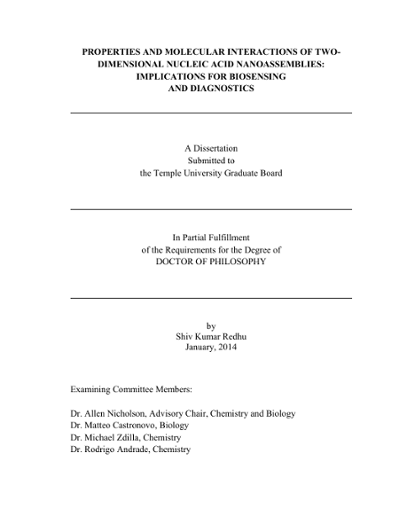 There is a need for the development of new technologies for the early detection of disease. Diverse initiatives are underway in academia and the pharmaceutical and biotechnology industries to develop highly-sensitive, high-throughput methods to detect disease-relevant biomarkers at the single-cell level. Biomarkers can define the progress of a disease or efficacy of disease treatment, and can include nucleic acids (RNA, DNA), proteins, small molecules, or even specific cells. While discovery research in this area is accelerating, there are a number of current experimental limitations. Most existing methodologies require a relatively large sample size. Also, amplification-based detection technologies are destructive to sample, and errors in amplification can occur, leading to an incorrect diagnosis. Nanomaterial-based devices (nanodevices) offer the promise of label-free, amplification-free detection strategies. Such nanodevices could allow analysis of minute biological samples without the requirement for amplification or incorporation of reporter groups. Loss of sample, due to handling and processing would be minimized and the sample could be recovered for further analysis. Atomic force microscopy (AFM) allows topographic imaging and compressibility/elasticity measurement of biomolecules on solid supports. AFM can enable assays of ligand binding with single molecule detection capability. Certain nucleic acid types, in particular double-stranded (ds) RNA, can act as a biomarker for specific cancers (e.g. leukemia) and viral infection. dsRNA also is of interest since it is a conserved structural feature of precursors to gene-regulatory RNAs, including micro (mi) RNAs and short interfering (si) RNAs. This project demonstrates a single-step, label-free, amplification-free approach for detecting the interaction of biomolecules that bind and/or process dsRNA, using a nanomanipulated, self-assembled monolayer (SAM) of a ds[RNA-DNA] chimera as imprinting matrix, a reference nuclease as imprinting agent, and AFM for imprint-readout. The action of the dsRNA-specific enzyme, ribonuclease III (RNase III), as well as the binding of an inactive, dsRNA-binding RNase III mutant can be permanently recorded by the input-responsive action of a restriction endonuclease that cleaves an ancillary reporter site within the dsDNA segment. The resulting irreversible height change of the arrayed ds[RNA-DNA] chimera, as measured by atomic force microscopy, provides a distinct digital output for each type of input. These findings provide the basis for developing imprinting-based nano-biosensors, and reveal the versatility of AFM as a tool for characterizing the behaviour of highly-crowded biomolecules at the nanoscale. RNA-DNA heteroduplexes are biomarkers for specific inflammatory conditions of genetic origin, and also are the product of capture of an RNA (e.g., miRNA) by a complementary DNA sequence. The approach used here to detect RNA-DNA hybrids is based on the ability of alkylthiol-modified ssDNA molecules to form monolayers and nanomatrices on gold surfaces (as described above) with density-dependent thickness, which increases upon formation of RNA-DNA hybrids following addition of a complementary oligoribonucleotide. Changes in hybrid matrix thickness can be measured by AFM, using a reference monolayer. RNA-DNA hybrid formation as well as subsequent processing by RNase H can be observed as a height increase or decrease, respectively, of the monolayer. When Mg2+ is omitted to prevent RNA cleavage, but not protein binding, a significant height increase is observed. The height increase is not observed with the corresponding ssDNA or ssRNA nanomatrices, and only occurs with nanomatrices having a hybrid density above a defined threshold. The data indicate formation of a stable multimeric RNase H assembly on the hybrid nanomatrix which provides a robust signal that is nondestructive to the RNA. The implications of these findings are discussed with respect to development of novel detection methodologies for RNA, dsRNA, and RNA-DNA hybrids.