USE OF MICROALGAE FOR WASTEWATER TREATMENT AND BIOFUEL PRODUCTION: EFFECTS OF ENVIRONMENTAL CONTAMINANTS ON THE CELLULAR RESPONSE 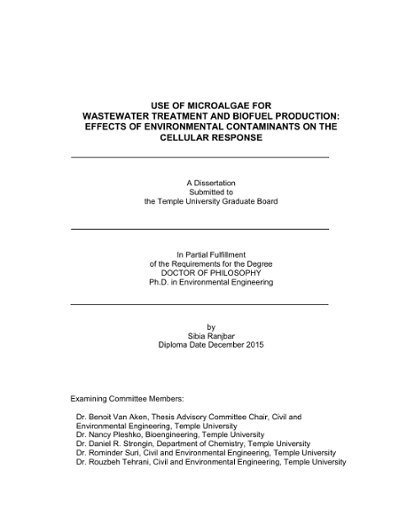 Microalga-based technologies are introduced to provide a new generation of biofuels. The cultivation of microalgae in wastewater as the growth medium may offer the dual benefit of wastewater treatment and sustainable biofuel production. The potential of microalgal biomass to be converted into biodiesel depends on the accumulation of lipids, mainly triacylglycerols. However, the presence of toxic contaminants in municipal or industrial wastewater could negatively affect the biomass growth and modify the pattern of lipid accumulation in algae cells. This research aims to evaluate the potential of cultivating microalgae in wastewater for the removal of selected contaminants and the production of biodiesel. The hypothesis underlying this work was that growing microalgae in the presence of contaminants, typically found in wastewater, may induce a stress response that potentially increases the lipid productivity and enhances the biofuel yield. This research explored the potential of microalgae to be used for the removal of wastewater pollutants while accumulating high concentrations of neutral lipid that can be converted into biodiesel. Physiological and transcriptional responses of two genera of green algae were observed in the presence of stresses induced by toxic metals in raw hydraulic fracturing flowback water and pharmaceuticals found in municipal wastewater. Two green algae, Dunaliella salina and Chlorella vulgaris, were selected based on the availability of genetic information, current trends in the alga industry, and specific growth requirement in hypersaline flowback water and municipal wastewater. The first part of this research focuses on the possibility of using the salt-tolerant green microalga, D. salina, for the removal of toxic metals from hydraulic fracturing flowback water. In the second part of this research, the freshwater green microalga, C. vulgaris, was exposed to a suite of pharmaceuticals, commonly found in municipal wastewater, and the effects on the biomass growth and lipid accumulation were evaluated. In Chapter 3, aqueous geochemical characteristics of hydraulic fracturing flowback water were determined. Metagenomic analysis was also used to characterize the microbial community structure of the water samples. This technique included DNA extraction, PCR amplification of genes for 16S and 18S ribosomal RNA, and pyrosequencing. Although the two flowback water samples were shown to have water property measures in the range of reported values in literature, they were significantly different from each other regarding water properties such as total dissolved solids and total organic carbon. They also had distinct microbial community structures. It was shown the flowback water samples contained mainly halophilic, anaerobic, and thermophilic species with a pattern that was expected to be seen in natural gas shale reservoirs. Chapter 4 covers the characterization of the effects of contaminants (toxic metals) in hydraulic fracturing flowback water on the biomass growth and cellular lipid accumulation in Dunaliella salina. Metals were analyzed using ICP-MS. Biomass accumulation was determined by spectrophotometry and gravimetric methods. Lipid accumulation and composition were determined by GC-MS after conversion into fatty acid methyl esters. D. salina was successfully cultivated in saline hydraulic fracturing flowback water, and algal biomass growth was associated with a significant reduction of several toxic metals in the samples. D. salina, grown in flowback water, accumulated high levels of cellular lipids. Also, the estimated biodiesel properties were comparable with other algal biodiesel and complied with the US and EU biodiesel standards. The last chapter of part one presents the effects of a collection of metals commonly found in hydraulic fracturing flowback water and other industrial wastewaters on growth and lipid accumulation of D. salina. The impacts of the nitrogen concentration in the growth medium were also observed. The Nile red assay (fluorescence measurement after Nile red staining) was used to assess lipid accumulation. A range of toxic effects on the algal growth was observed. However, the effects were lower at higher nitrogen level that may indicate to an improved toxicity resistance when nutrient stress is minimal. Even with a high dose-dependent toxicity on growth, some toxic metals increased lipid accumulation. Chapter 6 describes the microplate-based toxicity test conducted to characterize the effect of a range of emerging contaminants (pharmaceuticals) commonly found in municipal wastewater on the biomass growth and cellular lipid accumulation measured by Nile red staining assay. Similar to what was observed for metals in Chapter 5, some pharmaceuticals increased lipid accumulation, even with a high dose-dependent toxicity on algal growth. Most tested pharmaceuticals at municipal wastewater levels (low) did not have a significant effect on the algal growth and lipid accumulation. Toxicity data (EC50 of growth) were well in agreement with what was reported in literature and antibiotics were the most toxic compounds among the different pharmaceutical classes. Chapter 7 presents a further characterization of the effects of a few selected compound from the previous chapter. Changes in the algal lipid composition upon exposure to the selected compounds were determined by qualitative and quantitative analysis of the extracted lipids using GC-MS. FT-IR spectroscopy was used to detect changes in the cellular constituents. The transcriptional responses of the key genes involved in the lipid metabolism of C. vulgaris were also investigated upon exposure to tetracycline using reverse-transcription real-time PCR and the results were interpreted based on the measured levels of cellular lipids and other metabolites. Lipid accumulation was changed upon exposure of algae to pharmaceuticals; however, the FAMEs profile did not show a significant variation. FT-IR spectroscopy highlighted the subtle changes in the cellular basis, and FT-IR peak associated with lipids was strongly correlated with total FAMEs quantified by GC-MS (Pearson correlation coefficient = 0.89). Gene expression analysis showed a general down-regulation of genes involved in the lipid biosynthesis. Results from this research are expecting to help develop and optimize innovative algal-based technologies combining the benefits of wastewater treatment, sustainable biofuel production, and mitigation of carbon dioxide emissions.