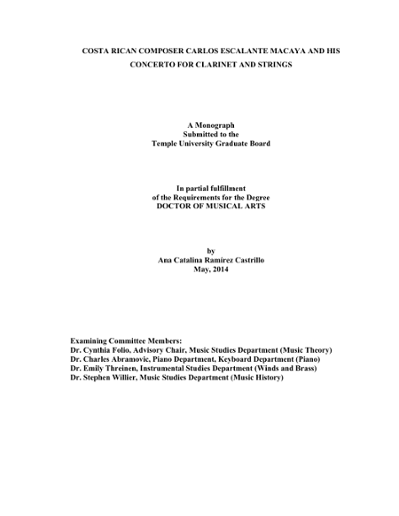 The purpose of this monograph is to promote Costa Rican academic music by focusing on Costa Rican composer Carlos Escalante Macaya and his Concerto for Clarinet and Strings (2012). I hope to contribute to the international view of Latin American composition and to promote Costa Rican artistic and cultural productions abroad with a study of the Concerto for Clarinet and Strings (Escalante's first venture into the concerto genre), examining in close detail its melodic, rhythmic and harmonic treatment as well as influences from different genres and styles. The monograph will also include a historical context of Costa Rican musical history, a brief discussion of previous important Costa Rican composers for the clarinet, a short analysis of the composer's own previous work for the instrument (Ricercare for Solo Clarinet) and performance notes. Also, in addition to the publication and audio/video recording of the clarinet concerto, this document will serve as a resource for clarinet soloists around the world. Carlos Escalante Macaya (b. 1968) is widely recognized in Costa Rica as a successful composer. His works are currently performed year-round in diverse performance venues in the country. His compositions vary widely, including orchestral, choral, and chamber music works, as well as music for dance, theater, and film. He is associate composer for the national dance and theater companies, and also receives many other commissions. He has received important national and Latin American composition awards, but his music, as that of other Costa Rican composers, is yet to be discovered outside of Latin America. Only one book, Música académica costarricense: Del presente al pasado cercano (2012), includes a commentary on Carlos Escalante Macaya. In it Costa Rican musicologist Ekaterina Chatski briefly analyzes two of his most important compositions: Los huesos tristes, commissioned in 2006 for the Choreographer's Festival, and Sinfonía Centenario (1997), winner of the Latin American Composition Competition of the centenary of the National Theater of Costa Rica. This book also includes a short biography of the composer and a list numbering 81 of his compositions up to the year 2008. The composer provided most materials necessary for my study, including multiple scores, inspirational visual materials, as well as a full interview (completed August 12, 2013) that will be included as an appendix. It is also important to mention that this concerto was written for me. The composer made significant effort to create a piece that would be, in his own words, a "perfectly fitted dress." My feedback ultimately made this piece what it is today, and my premiere of it on September 14, 2012, with the National Symphony Orchestra of Costa Rica, was an absolute success. This piece was so well received by the Costa Rican public that it was included in the National Symphony Orchestra of Costa Rica's latest CD recording of Costa Rican Music Composers. This recording is the first album of the National Symphony Orchestra to include a solo artist, so it is an honor for me to have been part of this wonderful project. Having been involved in all stages that brought this piece to life, I believe I am in the best position to present an analysis of the piece, to provide a historical background, and to offer performance recommendations for the future.