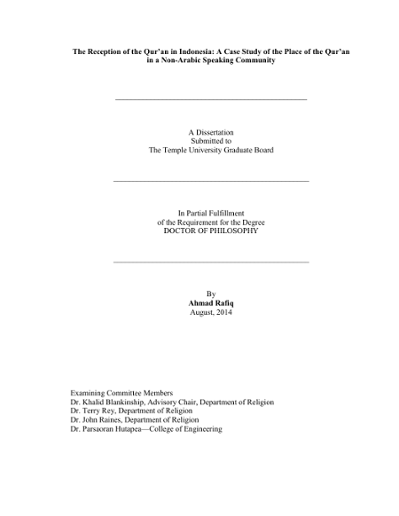 This Dissertation is on the reception of the Qur'an as it elaborates the place of the Qur'an in a non-Arabic speaking community in Indonesia. The Qur'an is the scripture and the primary source of Muslim teachings, a universal text in terms of time and place. The Qur'an was revealed during the life of Muhammad (pbuh) and has been transmitted and preserved in Arabic as its only language as all the prophets in Islam had been sent in the language of its immediate people. For its universal purpose, its target audience is all humankind regardless of their language or even religious affiliation. For Muslims, not only does it urge them to respond to its message and information, but also to believe in it. Indonesia is the most populous Muslim country in the world. Although Arabic is not the language of the people of this country, they perceive and share the Qur'an in Arabic as other Muslims do all over the world, and place it in the context of their local needs and situation. This study addresses two main issues: how Indonesians, in the case of The Banjars, the primary inhabitant of Banjarmasin, the Capital of South Borneo, as non-Arabic speaking Muslims perceive the Arabic Qur'an and how they appropriate the Qur'an for themselves in both their local contexts and its universal meaning. In both questions it identifies strategies of local community in claiming a universal value of the scripture (the Qur'an) as well as keeping their local identity. These strategies provide explanations of modes of reception of the Qur'an in various aspects of their life. In order to answer the questions, the Qur'an is placed in the axis of Muslims life. This scripture is a product of a revelation process during the era of the Prophet Muhammad and his Companions composing the early Muslim community. This community is regarded as the models for perceiving and practicing the Qur'an. On the other side of the axis, contemporary Muslims perceive and practice the Qur'an in their particular contexts. In the distance of time and space, they may read the models and universal values, while they may also create new practices to fit particular contexts. So, during this period, contemporary Muslims may perform a dual appropriation, namely appropriating their reading and practices to the past as a model and universal value and to the present as an actual need and strategy to respond to their own context. Using a phenomenological approach, this study finds that Muslims as a community of faith perceives the Qur'an as a written as well as recited text, which each form of it has different but related structures to be received. As the implied readers of the Qur'an, Muslims receive perspectives from those structures, while entertain their own perspectives responding the text in "structured act". In the case of this study, the Qur'an has been in the lives of Banjars extensively. The Qur'an fills in most critical situations of Banjar lives, exemplified by its presence in various life passages rites from cradle to grave. Dealing with language barriers, the main mode of reception of the Qur'an among the Banjars is through recitation. It emphasizes the oral tradition of the Qur'an, which is perceived as a way to invite the blessing, rewards, and devotional values of the Qur'an, rather than its guidance value. Any parts of the Qur'an recited would be valuable and efficacious to meet their material and spiritual needs. In most--if not all--rites, the recitation is followed by supplication in which they leave the case to God's final destiny to be followed wholeheartedly. By this mode of reception, the Banjars in the case of this study, in general preferred functional reception with performative functions of the Qur'an. However, it is not necessarily that their functional reception is totally free from the exegetical tradition. The latter might come through the layers of works, or extra-Qur'anic texts, inciting the practices and the role of local religious leaders as cultural brokers. Such works range from a thorough explanation of the meaning, excellences, and practices of the Qur'an to handbooks of particular use of the Qur'an. The local leader might play a role to connect the provided information to popular practices in order to justify, found, or transform the performative functions of the Qur'an. In the second problem of this study, the Banjar use a dual appropriation: they appropriate themselves to the model and also the current local context. They can relate themselves to the model and idealized past through tradition, which keeps their memory as well as structures of the model. Materially, they have kept a long-lasting tradition of knowledge preservation and transmission in Islam through ijazah (sacred pedigree). As a cultural broker, a religious leader who has personal ijazah infuses the communal tradition and practices of the Qur'an. The tradition can also be transmitted communally through the consulted works on the practices. It can be merely substantial by considering the general value of practices in the past to be appropriated in a totally new situation. The Qur'an is then appropriated into their local context to answer their specific needs and ends through creative reading of the past presented in several layers of extra-Qur'anic texts.