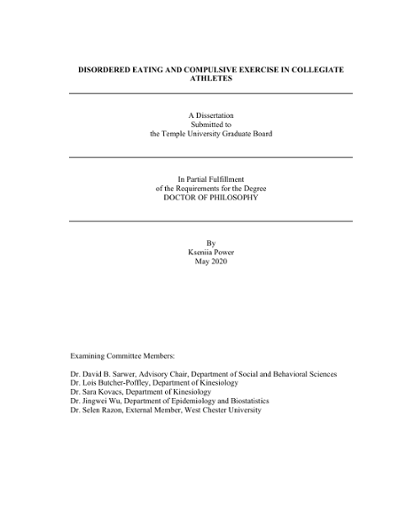 Over the past two decades, a large body of research has examined the issues of eating disorders as well as compensatory behaviors in collegiate competitive athletes. Up to 49.1% of student-athletes engage in disordered eating and compensatory behaviors, while up to 7.1% of athletes have symptoms that reach the threshold of formal psychiatric diagnoses. Greater symptoms are linked to reduced athletic and academic performance, both of which may impact physical and psychosocial functioning later in adulthood. However, most athletes suffer from these symptoms in isolation, as these behaviors are often undetected by athletic trainers and coaches. The purpose of the current study was: (a) to examine the prevalence of both formal eating disorders and disordered eating symptomatology in a sample of collegiate student-athletes; (b) to explore the frequency of compulsive exercise occurrence; (c) to investigate the differences in athletes’ disordered eating, compulsive exercise, and body image concerns by gender, sport type, and level of athletic participation; and (d) to assess the relationships among athletes’ disordered eating, compulsive exercise, and body image concerns, as well as associations between athletes’ age and each of these three variables. In total, 128 NCAA Division I varsity and club athletes completed the Eating Disorder Examination Questionnaire (EDE-Q), Compulsive Exercise Test (CET), and Multidimensional Body Self-Relations Questionnaire – Appearance Scales (MBSRQ-AS). Correlational analysis, Independent two-sample, and Welch’s t-tests were conducted to establish statistical significance for the relationships of interest. Out of 128 athletes, 11 athletes (8.6%) scored in the clinically significant range on at least one EDE-Q subscale. Four athletes (3.2%) met criteria for Bulimia Nervosa, 3 athletes (2.4%) met criteria for Binge Eating Disorder, and 2 athletes (1.6%) met criteria for Unspecified Feeding or Eating Disorder. In addition, 40 athletes (31.3%) reported subclinical symptoms of an eating disorder. Nineteen athletes (14.85%) scored above the clinical cut-off score for compulsive exercise behavior. Female athletes reported greater disordered eating symptomatology and body image dissatisfaction than males. In addition, lean-sport athletes had a higher prevalence of maladaptive eating behaviors than non-lean sport athletes. Age was not associated with athletes’ disordered eating, compulsive exercise, and body image scores. Also, no differences were found between club and varsity athletes for the same variables. Positive correlations were found between athletes’ eating pathology and their compulsive exercise behaviors, suggesting that greater eating disorder symptoms were associated with greater excessive exercise engagement. In contrast to athletes with no symptoms of an eating disorder, athletes with symptoms of an eating disorder reported using exercise as a weight control measure. Higher levels of body image dissatisfaction were also associated with greater eating pathology. This study addressed a number of methodological shortcomings across the body of eating disorder research (e.g., studies with insufficient sample sizes, lack of group comparisons by age and level of athletic participation, and suboptimal psychometric measures) and underscored the need for a new generation of studies. The study also explored the frequency of compulsive exercise, a compensatory behavior which is highly prevalent, but often overlooked among athletes. The study findings may aid coaches, athletic administration, and mental health professionals in identifying at-risk athletes. The study findings also inform the development of prevention and treatment efforts.