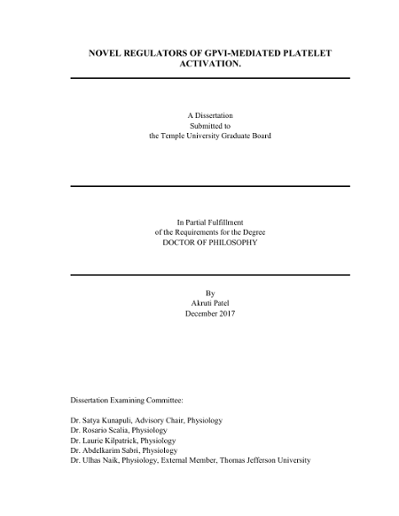 Platelets are anucleate cells that are crucial mediators of hemostasis and thrombosis. Under physiological conditions, platelets are maintained in a quiescent state within the vasculature. Upon vascular injury, an essential receptor that initiates platelet activation upon interaction with sub-endothelial collagen is Glycoprotein VI (GPVI). The activation of platelets leads to platelet shape change, granular secretion, thromboxane A2 (TXA2) synthesis, and integrin IIb3-mediated platelet aggregation and thrombus formation. In the past, a lot of effort has been placed in understanding GPVI and its signaling in platelets, however, much is still unknown. Therefore, the focus of this thesis is to identify novel regulators of GPVI-mediated platelet signaling. Phosphoinositide 3-kinase (PI3K) is an important signaling molecule that is activated downstream of various receptors including GPVI upon platelet activation. PI3K activation leads to the generation of phosphatidylinositol (3,4,5)-trisphosphate (PIP3) subsequently leading to the recruitment of pleckstrin homology (PH) domain-containing proteins to the plasma membrane. We performed a proteomic screen to identify proteins that interacted with PIP3 using PIP3 beads, and among these proteins, we found engulfment and cell motility-1 (ELMO1). ELMO1 is a scaffold protein with no catalytic activity that regulates the actin cytoskeleton during cell motility and cell spreading in nucleated cells. ELMO1 is expressed in platelets and interacts with active RhoG. However, the function of ELMO1 is not known. Therefore, we utilized ELMO1-/- mice to investigate the role of ELMO1 in platelets. Aggregation, granular secretion, and thromboxane generation was enhanced in ELMO1-/- platelets in response to glycoprotein VI (GPVI) agonists, collagen-related peptide (CRP) and collagen, but unaltered using protease-activated receptor 4 (PAR4) agonist (AYPGKF). This suggests that ELMO1 plays a specific role downstream of GPVI despite normal surface expression level of GPVI. Furthermore, whole blood from ELMO1-/- mice, perfused over collagen, under arterial shear conditions, exhibited enhanced thrombus formation compared to blood from WT littermate controls. In an in vivo pulmonary thromboembolism model, ELMO1-/- mice showed reduced survival compared to WT littermate control. ELMO1-/- mice also showed shorter time to occlusion using the ferric-chloride injury model and reduced tail bleeding times compared to WT littermate control. This indicates that ELMO1 plays an essential role in hemostasis and thrombosis in vivo. At the molecular level, RhoG activity was enhanced in ELMO1-/- murine platelets compared to the WT littermate control in response to CRP. Together, these data suggest that ELMO1 negatively regulates GPVI-mediated thrombus formation via RhoG. Protein kinase C delta (PKC) is a serine/threonine kinase that positively and negatively regulate dense granule secretion downstream of PAR and GPVI receptors, respectively. However, the mechanism of such differential regulation is not known. We hypothesize that this differential regulation occurs via the phosphorylation of specific tyrosine sites on PKC downstream of GPVI and PARs. We observed that many of the tyrosine residues in PKC were phosphorylated in response to both GPVI and PAR activation. Interestingly, PKCY155 phosphorylation only occurred following GPVI stimulation. Hence, we generated PKCY155F KI mice to characterize the function of PKCY155 phosphorylation in platelets. Aggregation and dense granule secretion were unaffected in PKCY155F platelets upon stimulation with a PAR agonist. However, these platelet functional responses were decreased upon stimulation of PKCY155F platelets with GPVI agonists, compared to WT littermates, despite normal surface GPVI expression. Whole blood from PKCY155F mice perfused over collagen under arterial shear conditions showed decreased thrombus formation. Similarly, we observed that PKCY155F mice survive longer than controls using a pulmonary thromboembolism model. PKCY155F mice also exhibited longer time to occlusion using the ferric-chloride injury model. At the molecular level, Syk and PLC2 phosphorylation was decreased in the PKCY155F platelets following GPVI stimulation. In conclusion, PKCY155 phosphorylation positively regulates GPVI-mediated platelet activation. Together, the studies proposed in this thesis provide insights into regulation of GPVI-mediated platelet function by ELMO1 and PKCY155. ELMO1 negatively regulates GPVI-mediated platelet activation via RhoG and may provide a suitable target for antihemorrhagic therapy. While PKCY155, being a positive regulator of GPVI-mediated platelet activation, could be a potential drug target for anti-thrombotic therapy.