DECLINE OF A HERITAGE LANGUAGE, PALAUAN: THE INTERPLAY OF LANGUAGE POLICIES, PLANNING, PRACTICES AND OPINIONS IN PALAU 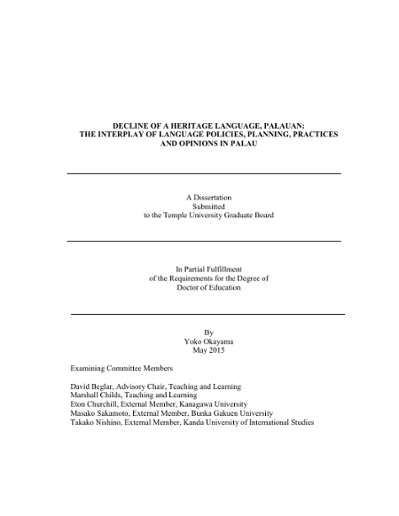 This case study investigates the language policies and planning (LPP) implemented in Palau since the occupation by Japan before and during World War II, and by the United States of America under the United Nation's Trusteeship after the war. Palau is an island country in the Pacific with a population of 17,500, including 4,600 foreign-born citizens. The society is multilingual as a result of a 150-year occupation by other countries, including Japan and the United States, before its independence in 1994. In this study I also explore the effects of LPP during that time, including the policy regarding a standard writing system, practices at pedagogical institutions, and Palauans' opinions about languages, especially the two official languages, Palauan and English. Data were gathered through interviews, historical document study, observations of classes, and a questionnaire administered in Palau, by visiting the country more than 20 times, for one- to two-week stays beginning in 2001. Hornberger (2006) stated that the terms language policy and language planning have been used interchangeably or as a single concept in many previous studies. Her suggestion was to use the two terms as a set, as the relationship between them has been ambiguous in the past (p. 25). I agree with Hornberger that the two terms fundamentally form a single concept, and therefore, they are used as a set in this study. The theoretical framework proposed by Taylor (2002) is used to analyze the current LPP in Palau: that is, (1) language planning composed of (1.1) status planning, (1.2) corpus planning, and (1.3) acquisition planning; (2) language-in-education policy; and (3) aspects of language-in-education implementation program that consist of (3.1) curriculum policies, (3.2) personnel policies, (3.3) material policies (methods, content), (3.4) community policies, and (3.5) evaluation policies (p. 318). He stated, "[t]he process of devising a new national language policy" affects "language-in-education implementation programs" (p. 318). Major LPP studies were reviewed chronologically based on three phases suggested by Ricento (2000, pp. 10-22). It was helpful to consider the history of LPP "as a dynamic interplay between academic concerns... and political/bureaucratic interests" (Wee, 2011, p. 11). Also, some previous researchers have noted that localized studies of language goals, language use, and language change are needed. According to Kaplan and Baldauf (2003), who studied languages and language-in-education planning in the Pacific Basin, it is rare for Pacific Basin countries to have a language policy: "... [L]anguage planning is frequently undertaken by the education sector in the absence of any such higher-level policy or in the light of such a policy so vaguely articulated as to be quite incapable of implementation" (p. 6). Although their study provided a great deal of valuable information, they did not investigate the language policies of Palau. In this study I describe the government's policies, and real life situation of the policies. To describe the real life situation of the policies, interviews, and a questionnaire survey were used. I interviewed Palauans, such as those who had experienced the occupation(s) and postwar period to better understand the historical background of the current LPP. I also interviewed incumbent teachers after observing their classes. Most of them described various problems in teaching the compulsory Palauan Studies Course, on Palauan language, history, tradition, and culture. I also interviewed officials of the Ministry of Education, who provided a great deal of information about the educational system in Palau and the curriculum of the Palauan Studies Course. The 62-item questionnaire provided data concerning people's language use in various social contexts, as well as the effects of language policies and planning on people's opinions about languages. The 137 respondents were divided into five groups according to their year of birth, considering the years when important transitions had occurred in the LPP. Their responses were compared, and some of the respondents were interviewed to illuminate the questionnaire results. I interviewed eight Palauans in March and September 2012 and asked why they had selected certain responses to the questionnaire items. The questionnaire results indicated that there is a tendency for the younger generation to use English more than the older generations in various contexts, and that the efforts Palauans have made, such as making the new writing system a compulsory part of the school curriculum, have yielded positive effects on the opinions of the younger generation, who learned the Palauan writing system at school. Overall, the results showed that Palauan is not in danger of extinction at present, but it might lose its status as the primary language in the future. I suggest strategies for preserving Palauan as the primary language.