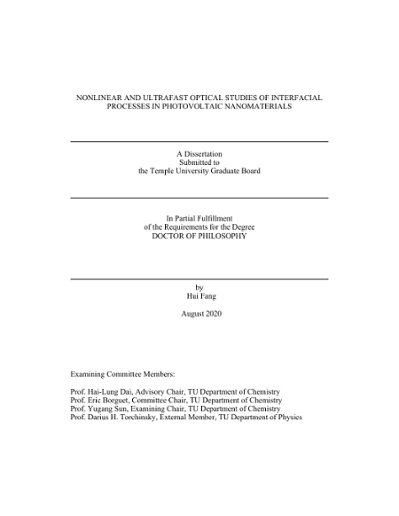 The development of efficient solar energy conversion devices has attracted much attention. Despite the fact that progress have been achieved, a fundamental understanding examining why efficiency can be improved remains elusive. For example, dye-sensitized solar cells (DSSC) exhibit high conversion efficiency when acetonitrile is used to prepare both the working electrode and the electrolyte. However, the mechanism explaining exactly how solvent influences device performance has not yet been systematically investigated. Another prominent example is the metal/semiconductor heterojunction systems. While it has been demonstrated that such mixed systems can significantly improve solar conversion efficiency, the mechanism of the electron dynamics driving these systems remains controversial. This stems in part from the fact that the experimentally deduced time constants, which are characteristic of such systems, are only ever extracted from phenomenological models and therefore cannot be assigned to specific physical processes. Ultimately, the development of a physical model is necessary to obtain an unambiguous physical picture of the solar conversion process. In this dissertation, the ultrafast nonlinear spectroscopic methods, second harmonic light scattering (SHS) and transient absorption (TA) spectroscopy, have been employed to study dye molecular adsorption and charge transfer dynamics in several solar energy conversion systems, including 1) DSSC, where solvent effects are investigated to understand why acetonitrile is the most effective solvent; 2) Ag/TiO2 heterostructure system, where a physical model is proposed to quantitively analyze the electron dynamics; 3) porphyrin/Ag/TiO2 nanocomposite, where we found there is no electron injection from porphyrin to TiO2 and plasmonic metal can enhance the porphyrin dye adsorption to improve the device efficiency. The propensity for surface adsorption of two related dyes, ortho-ethyl red (o-ER) and para-ethyl red (p-ER), onto TiO2 particles is studied with SHS. While p-ER readily adsorbs onto TiO2, o-ER does not. It is suggested that this difference is linked to the effects of the steric hindrance of the adsorbate. The influence of the solvent on the adsorption of p-ER onto TiO2 is also investigated. Of significance, p-ER can only chemically bond to the TiO2 surface in aprotic solvents, where adsorption free energy scales with solvent polarity. For protic solvents, preferential adsorption of the solvent shell ultimately prevents direct adsorption of p-ER onto the surface of TiO2. Likewise, solvent effects on charge transfer from p-ER to TiO2 are studied by TA. The electron injection rate is shown to be positively related to solvent polarity. Overall, highly polar aprotic solvents are shown to facilitate dye adsorption and electron injection, which helps improve the efficiency of DSSC devices. Ultrafast dynamics of plasmon-induced hot electrons from Ag to TiO2 nanorods are probed by TA. The observed transient signal, which corresponds to the lifetime of the optically generated electrons, is analyzed using a physical model including electron injection, relaxation, band edge annihilation, the surface to bulk diffusion, and back diffusion from the bulk to the surface. A ca. 13 fs electron injection time is deduced for Ag to TiO2, which is faster than that generated in Au and dyes. Additionally, the excited state exciton dynamics of a porphyrin J-aggregate are investigated and subsequently modeled. More rapid dynamics are found following aggregation of the porphyrin, which can be attributed to the inclusion of more efficient relaxation channels. However, no electron injection from the J-aggregate to TiO2 is observed. This likely stems from the negatively charged repulsion between the two components. Further, when the J-aggregate is introduced into an Ag/TiO2 system, optical excitation occurs predominantly in the J-aggregate. This stems either from direct excitation of the J-aggregate or indirect excitation through plasmon-induced resonant energy transfer from Ag. Our results indicate that plasmon can enhance the dye adsorption, which has great potential for designing more efficient plasmonic DSSC devices.