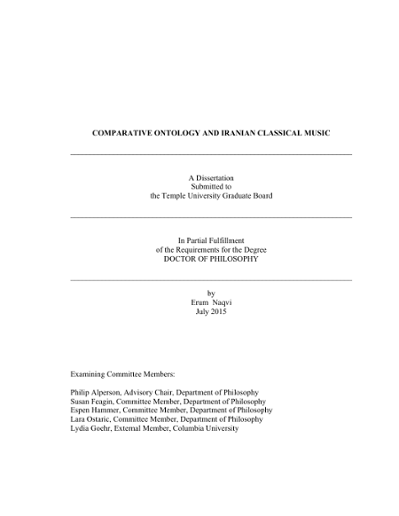 My project explores why it is so difficult to reconcile questions about the nature and meaning of music in philosophy with the case of Iranian classical music. This tradition is highly performative, musicians rarely use scores, and, importantly, that anyone who calls herself a musician but cannot extemporize is not really considered much of a musician in Iran at all. Yet curiously, despite the emphasis on extemporization in this tradition, there is, nonetheless, a resounding sonic familiarity among performances considered as falling in the classical genre, so much so that it seems odd to say that extemporization is the extemporization of something new. Moreover, there is very little concern with musical works, as understood in the western classical sense. My first chapter articulates the methodology I advocate. This methodology is adapted from Lydia Goehr’s The Imaginary Museum of Musical Works (1992). Goehr offers a reading of the history western classical music that looks for the concepts around which its discourses center. I argue that the application of similar analysis to what scholars in other music traditions have to say about music will reveal something about the concepts around which their practices center. The emphasis is on reading the discourses of a practice for the concepts that dictate the thinking about it. This, I suggest, helps to make sense of what musicality means in the tradition in question. My central claim is that when Iranian classical music is read this way, one concept emerges as centrally significant. This concept is not of the work, but of embodied activity: a notion of doing in musical practice that relies heavily on the idea of musical dexterity in the performing moment, without this doing being oriented to the creation of something work-like. My second, third, and fourth chapters articulate and situate this reading against discussions about the ontological significance of performance in the philosophy of music. In my second chapter, I argue that the historical attention to mentally composed sound structures in Eduard Hanslick’s 1854 book, On the Musically Beautiful—a foundational text for the contemporary philosophy of music—leaves out the performing activity in musical practice. This, I suggest, is captured in the difference of approach to the musical nightingale: a metaphor that serves to illustrate musicality in the Iranian context but stands in Hanslick’s theory, for everything that music is not. In my third chapter, I offer a detailed reading of Iranian classical music to expose more fully the conceptual shape and force of the sort of embodied activity that the trope of the nightingale captures, when scholars of Iranian classical music analogize it—as they so often do—as the metaphorical aspiration of classical musicians, because it is considered the most musical being on earth in virtue of its dexterity. This, I contextualize using Polanyi’s notion of tacit knowledge (1966). In my fourth chapter, I explore the extent to which the reading I offer of Iranian classical music may be accommodated by contemporary discussions in the ontology of performance by turning to contemporary discussions that move away from addressing performances of works, but center on the significance of performative activity itself. This happens most commonly for the case of musical improvisation, after the question is introduced by Philip Alperson in “On Musical Improvisation” (1984). My claim here is that there is a crucial difference between the two cases. This difference is that embodied activity is not product-oriented in Iranian classical music practice, but rather, dexterity or technique oriented. In my final chapter, I explore how this insight can be extended more broadly into philosophical analysis, particularly in its comparative dimensions. I suggest there are implications not only for the ontology of performance, but notions of self-expression, creativity, and aesthetic attention, when they are considered in this culturally comparative light. In doing so, I hope to raise questions about the potential for doing non-reductive comparative ontology, and what can be gained, in a broad sense, from the effort of looking at artistic practice through a culturally different lens.