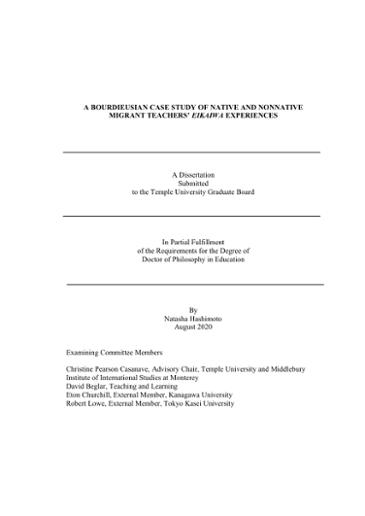 This critical multi-case study involves a group of migrant eikaiwa (English conversation) school teachers in Japan. The purpose of the study was to investigate the teachers’ positions and treatment in the commercial English language teaching (ELT) sector and their adaptation to their work environment and the host country, through applying the concepts of capital, habitus, and field. The issues of who should be employed as teachers, to whom learners should be exposed to as model language users, and whose English should be taught that are problematized in this study have implications beyond the commercial ELT industry. This study also sheds light on the eikaiwa industry’s practices, in particular regarding teacher recruitment and marketing. The study is timely because the impact of this industry has grown significantly as the formal educational sector has increased the outsourcing of ELT courses to the commercial sector in recent years. Teachers from private language academies have been dispatched to high schools and universities, which has blurred the line between the commercial sector and formal educational institutions. The core cases investigated in the study were six multilingual native and nonnative English-speaking migrant teachers from diverse national, ethnic, and socio-cultural backgrounds. For triangulation purposes, data were collected not only in individual interviews and emails exchanged with the six core participants, but also from interviews and emails with 10 managers and private language academy owners, 13 teachers who were noncore participants, and from eikaiwa job postings. Managers and school owners, mainly male native English speakers, were included for their perspectives and insights into the sector, in particular, staffing decisions and marketing, to which most teachers were not privy. Data analysis draws on Bourdieusian “thinking tools” (Bourdieu & Wacquant, 1992, p. 160), with the focus on gains, losses, and conversions of different types of capital and manifestations and transformations of teachers’ habitus in new fields. Capital here refers to convertible resources that people have access to, such as educational degrees and social connections. Habitus is one’s “feel for the game” (Bourdieu, 1998, p. 25) that influences an individual’s perceptions and behavior (Bourdieu, 2000, pp. 86-87). The participants’ habitus was a driving force that strongly affected their adaptation to the eikaiwa industry and Japan. However, habitus did not operate independently on its own. It functioned in interplay with capital and the field that rejected some but embraced other teachers. Participants’ English as a first language, Western cultural background, and White race, which were positively evaluated in their ELT contexts in Japan, influenced the way the participants were treated in the industry and resulted in different outcomes for them. The native English-speaking teachers of Asian descent were racially discriminated, but they relatively easily found ELT work because of their nationalities and native English-speaking status. The nonnative English-speaking participants who were also people of color were discriminated against not only based on their race and nationality. They were also discriminated against because of their nonnative English-speaking status. In contrast, White nonnative English-speaking participants were frequently rejected because of their first language and nationality. Due to the insecure nature of contract work and few opportunities for career development in the commercial sector, most participants were unable to build stable careers in ELT. Whereas some had limited success in finding an administrative position within the commercial sector, most participants felt trapped in it, unable to gain substantial convertible capital during their teaching years. The participants’ choices regarding their employment and further migration were partly determined by the stakeholders in the field, and outcomes widely varied for the participants. By the end of the study, two nonnative English-speaking participants left ELT and Japan. Two native English speakers found non-teaching work in Japan. One native and one nonnative English-speaking participant, both female, continued teaching even though their ELT jobs were not their ultimate professional goals.