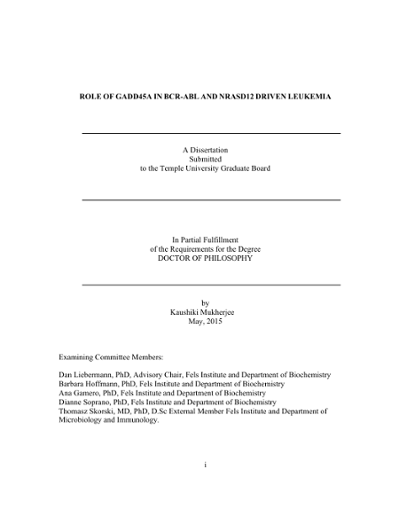 BCR-ABL is known as the most common translocation in the myeloproliferative (MPD) disorder chronic myelogenous leukemia (CML); it is the first leukemia to be described and associated with a consistent cytogenetic abnormality, termed the Philadelphia chromosome (Ph1). Ph1 is a shortened chromosome 22 that is the consequence of a reciprocal translocation between chromosomes 9 and 22, t(9;22)(q34;q11). BCR-ABL is known to display constitutively active tyrosine kinase activity that leads to the recruitment of downstream effectors of cell proliferation and survival, via several adapter proteins (e.g., GRB2, GAB2, CRKL.) and signaling pathways (e.g., RAS, PI3K, JAK STAT, PDk2-NFkB), all thought to contribute to the pathogenesis of CML. CML, essentially consists of 3 different phases based on disease severity; namely Chronic Phase (CP-AML), Accelerated Phase (AP-CML) and blast crisis (BC-CML). Imatinib, a small molecule ABL kinase inhibitor has been highly effective in treating chronic phase (CP) CML patients. However, a substantial number of patients undergo relapse due to development of resistance to imatinib therapy that leads to BC-CML, which is invariably fatal within weeks to months. Additional genetic aberrations assist in progression and identification of key players that are responsible for transformation is of utmost importance from a therapeutic point of view. Growth arrest DNA damage 45a (Gadd45a) gene, a member in the gadd45 family of genes including Gadd45b & Gadd45g, was identified as a myeloid differentiation primary response gene. There is evidence consistent with it's involvement in G2/M cell cycle arrest and apoptosis in response to multiple stressors, including genotoxic and oncogenic stress. Gadd45a has been shown to participate in cell cycle arrest, DNA repair, cell survival and apoptosis in response to environmental and physiological stress, via protein-protein interactions with key regulators such as PCNA, histones, cdk1, p21, MEKK4, MKK7 and p38. To investigate the effect of Gadd45a in the development of CML, we performed adaptive bone marrow transplantation experiments with either wild type or Gadd45a null myeloid progenitors expressing 210-kD BCR-ABL fusion oncoprotein. We showed that that loss of Gadd45a accelerated BCR-ABL driven CML and correlated with enlarged liver and spleen pointing to more aggressive leukemia. Additionally, we demonstrated that Gadd45a expression in presence of BCR-ABL was independent/distinct from well-known tumor suppressor p53, which suggests that Gadd45a could be considered as a prime and novel candidate for intervention in CML therapy. We also showed that transformed Gadd45a deficient progenitors in the presence of BCR-ABL, exhibited increased proliferation, increased survival and decreased apoptosis when compared to WT/BCR-ABL counterparts. Additionally, we demonstrate that recipients transplanted with Gadd45ako/BCR-ABL bone marrow exhibit increased number of Leukemic stem cells (LSC) harboring BCR-ABL which correlated with accelerated disease development in Gadd45a deficient background. Furthermore, we show that Gadd45ako/BCR-ABL progenitors exhibit increased self-renewal capabilities compared to WT/BCR-ABL progenitors through serial replating assays. Remarkably, we demonstrate that Gadd45ako/BCR-ABL bone marrow cells could be established as a factor independent cell-line and that this cell- line exhibited progenitor like properties; thereby confirming the status of Gadd45a as potent tumor suppressor factor. To shed more light into the mechanism of disease development, we demonstrate that the Gadd45ako/BCR-ABL bone marrow cells exhibit enhanced PI3K-AKT-4E-BP1 signaling and upregulated oncogenic p30C/EBPα expression along with hyperactivation of p38 and Stat5. Finally, to validate our observations in human CML population, we demonstrate that Gadd45a expression correlated with disease progression. We show that Gadd45a expression is upregulated in more indolent CP-CML samples and downregulated in aggressive AP-CML and BC-CML patient samples. Future studies to identify expression of downstream partners of Gadd45a in CML patients, gain of function experiments along with inhibitor studies to highlight mechanistic insights would shed more light into the tumor suppressor function of Gadd45a. Additionally, questions such as; do elevated levels of Gadd45a impede disease progression, does higher expression of Gadd45a indicate better response to Imatinib, still need to be answered in order to understand if Gadd45a agnostic and or combinatorial therapy in CML can be considered as a valid treatment option. The most common mutations of Ras are found in N-RAS (~30%), less frequently in K-RAS (~15%), and most rare in H-RAS in leukemia. Given the role of Gadd45a in modulating the response of hematopoietic cells to stress as well as its function in mediating oncogenic H-Ras carcinogenesis, we wanted to assess if and how Gadd45a loss modulates Nras driven leukemogenesis. By utilizing adaptive bone marrow strategy we show that loss of Gadd45a impeded activated Nras driven leukemia. This correlated with higher incidence of extramedullary hematopoiesis in the liver and spleen sections of WT/NrasD12 recipient mice compared to Gadd45ako/NrasD12 counterparts. Future studies to investigate the biological effects and shed more light on mechanistic insights in recipient mice is still underway. Taken together my work implies that also in the context of hematopoietic malignancies Gadd45a may function as suppressor or promoter of the leukemic phenotype dependent on the oncogenic stress.