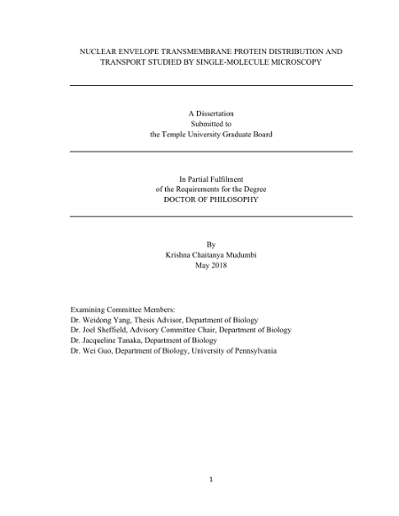 The nucleus of eukaryotic cells is a vitally important organelle that sequesters the genetic information of the cell, and protects it with the help of two highly evolved structures, the nuclear envelope (NE) and nuclear pore complexes (NPCs). Together, these two structures mediate the bidirectional trafficking of molecules between the nucleus and cytoplasm by forming a barrier. NE transmembrane proteins (NETs) embedded in either the outer nuclear membrane (ONM) or the inner nuclear membrane (INM) play crucial roles in both nuclear structure and functions, including: genome architecture, epigenetics, transcription, splicing, DNA replication, nuclear structure, organization and positioning. Furthermore, numerous human diseases are associated with mutations and mislocalization of NETs on the NE. There are still many fundamental questions that are unresolved with NETs, but we focused on two major questions: First, the localization and transport rate of NETs, and second, the transport route taken by NETs to reach the INM. Since NETs are involved with many of the mechanisms used to maintain cellular homeostasis, it is important to quantitatively determine the spatial locations of NETs along the NE to fully understand their role in these vital processes. However, there are limited available approaches for this task, and moreover, these methods provide no information about the translocation rates of NETs between the two membranes. Furthermore, while the trafficking of soluble proteins between the cytoplasm and the nucleus has been well studied over the years, the path taken by NETs into the nucleus remains in dispute. At least four distinct models have been proposed to suggest how transmembrane proteins destined for the INM cross the NE through NPC-dependent or NPC-independent mechanisms, based on specific features found on the soluble domains of INM proteins. In order to resolve these two major questions, it is necessary to employ techniques with the capabilities to observe these dynamics at the nanoscale. Current experimental techniques are unable to break the temporal and spatial resolution barriers required to study these phenomena. Therefore, we developed and modified single-molecule techniques to answer these questions. First, to study the distribution of NETs on the NE, we developed a new single-molecule microscopy method called single-point single-molecule fluorescence recovery after photobleaching (smFRAP), which is able to provide spatial resolution &lt;10 nm and, furthermore, provide previously unattainable information about NET translocation rates from the ONM to INM. Secondly, to examine the transport route used by NETs destined for the INM, we used a single-molecule microscopy technique previously developed in our lab called single-point edge-excitation sub-diffraction (SPEED) microscopy, which provides spatio-temporal resolution of &lt;10 nm precision and 0.4 ms detection time. The major findings from my doctoral research work can be classified into two categories: (i) Technical developments to study NETs in vivo, and (ii) biological findings from employing these microscopy techniques. In regards to technical contributions, we created and validated of a new single-molecule microscopy method, smFRAP, to accurately determine the localization and distribution ratios of NETs on both the ONM and INM in live cells. Second, we adapted SPEED microscopy to study transmembrane protein translocation in vivo. My work has also contributed four main biological findings to the field: first, we determined the in vivo translocation rates for lamin-B receptor (LBR), a major INM protein found in the nucleus of cells. Second, we verified the existence of peripheral channels in the scaffolding of NPCs and, for the first time, directly observed the transit of INM proteins through these channels in live cells. Third, our research has elucidated the roles that both the nuclear localization signal (NLS) and intrinsically disordered (ID) domains play in INM protein transport. Finally, my work has elucidated which transport routes are used by NETs destined to localize in the INM.