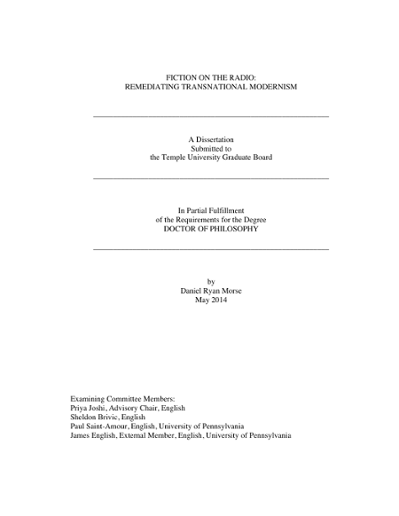 The BBC was the laboratory for major experiments in modernism. Notions of aesthetics, audience, and form were tried out before the microphones of 200 Oxford St., London and heard around the world, often before they were in England. The format of the radio address and the instant encounter with listeners shaped both the production and politics of Anglophone modernism to an extent hitherto unacknowledged in literary studies. This dissertation focuses on how innovative programming by modernist writers, transmitted through instantaneous radio links, closed the perceived physical, cultural, and temporal distances between colony and metropole. Charting the phenomenon of writing for, about, and around broadcasting in the careers of E. M. Forster, Mulk Raj Anand, James Joyce, and C. L. R. James, the dissertation revises the traditional temporal and geographical boundaries of modernism. Contrary to the intentions of the BBC's directors, who hoped to export a monolithic English culture, empire broadcasting wreaked havoc on the imagined boundaries between center and periphery, revealing the extent to which the colonies paradoxically affected the cultural scene "at home." The Eastern Service (directed to India), where the abstract idea of a serious, cultural station was put into practice, was the laboratory for the Third Programme, England's post-war cultural channel. Yet the effects of Empire radio are hardly limited to its considerable impact on postwar British broadcasting. The intellectual demands of Indian listeners set the parameters of and bankrolled the literary work performed by modernist writers in England. Addressing authors and readers in India from a studio in London, Mulk Raj Anand embodied a crucial aspect of the Eastern Service, its treatment of English and Indian culture as mutually influential and coeval. Anand's broadcasts and 1945 novel The Big Heart (written during his BBC years) critique imperialism by positing the simultaneity of Indian and English temporality. In so doing, Anand's works offer a rejoinder to narratives of colonial belatedness pervasive both at the time and in the present. When tackling such transnational work, radio studies is uniquely positioned to provide an archive and a radical new model for modernist studies as it grapples with critiques of the western diffusionist model of culture. Literary production in and around the BBC registers radical cultural upheaval with a diagnostic power that reveals the attenuated ability of hypercanonical modernism alone to illuminate modernity's complex relays. Modernism on the BBC was not an exclusive canon of works, singular set of formal features, or even a unique posture. Instead, writers such as James, Forster, Anand, and Joyce offered complex responses to the pressures of modernity, including disruptions wrought by colonization, immigration, and war.&#8195;