Twelve Days of Hell: A Study of Violence, Historical Memory, and Media Coverage of the York, Pennsylvania Race Riots, 1968-2003 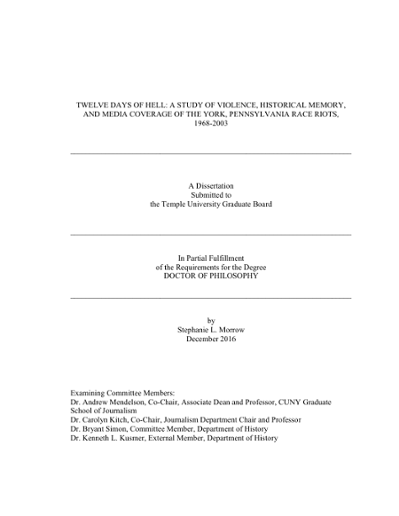 Race riots have struck America’s cities large and small for more than a century, and the media have retold these brutal events for American audiences. The 1960s, in particular, endured years of violent rioting due to social and economic inequalities between whites and blacks, and many of these riots have received ample coverage from the media and academic scholars. However, a lesser-known riot that destroyed homes, devastated businesses, and took the lives of two individuals was the 1969 York, Pennsylvania race riots. Similar to more well-known riots, such as the 1965 Watts riot and the 1967 Detroit riot, the racial violence in York was the result of decades of inequalities and frustrations between blacks and whites. What sets this riot apart is that two murders that occurred over those twelve deadly days in 1969 would go unsolved for more than thirty years. The killing of a twenty-seven-year-old black woman, Lillie Belle Allen, and a twenty-two-year-old white rookie police officer, Henry C. Schaad, were not resolved until their killers were brought to justice in 2002 and 2003, respectively. This dissertation explores the development of journalistic approaches to covering race relations in the United States. The methods employed to cover the 1969 York race riots and subsequent murder trials differ greatly from those more recent racial protests today. First, an examination of coverage from 1968 and 1969 reveals how the newspaper and television news media dictated public opinion of these violent events and established the foundation for a historical narrative. Then, the study fast-forwards thirty years to when the local York media commemorated the thirty-year anniversary of the riots in 1999. Although the local media briefly revisited the story of the 1969 York riots after they transpired, this local story came back unexpectedly in full force in 1999. However, the local audience was not ready to remember those events. These commemorations not only broke the silence of many York citizens, but also magnified the inequalities and social issues facing York in the present while also instigating the reopening of the Allen and Schaad murder cases in 2000. In addition, the mayor of York, Charles Robertson, was arrested in 2001 for the murder of Allen, bringing the newsworthiness of this story to another level. Mayor Robertson’s involvement in the story suppressed the larger social issues that led to the riots and, instead, over-simplified the story as one, racist villain who instigated the violence. By examining the local, regional, and national media coverage of these events, I argue that the narratives used personified, dramatic style to express competing accounts of what caused the York race riots and the personas of the characters involved, as well as the larger issues or race relations and race reconciliation. By emphasizing the role of the news media as storytellers, this dissertation determines that the journalists created new, dramatic, and sometimes misleading, narratives that retold the story of the 1969 York race riots in the present.