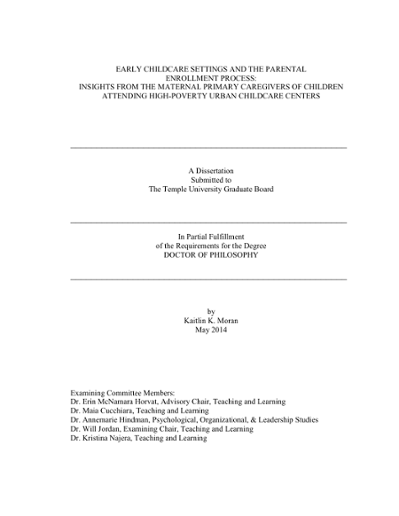 Every day in the United States, millions of children living in high-poverty neighborhoods are dropped off at a variety of early childcare settings and arrangements. When those settings are high quality, early childhood education can produce both short and long term benefits for this population, including increases in school achievement and in literacy attainment and decreases in grade retention, the likelihood of early dropout, and behavioral issues (August & Hakuta, 1997; Barnett, 1995; Brooks-Gunn & Duncan, 1997; Entwisle & Alexander, 1993; Korenman, Miller, & Sjaastad, 1995; McLoyd, 1998; Wertheimer & Croan, 2003; Zill, 1999). Early childhood education, however, is neither a formalized nor mandatory educational level, which gives parents significant latitude in deciding when and where to enroll their children. Consequently, it is important to better understand the quality, availability, distribution, and use of non-parental childcare across different settings. A more nuanced perspective is also necessary because there is great variation in the types of and tendencies toward childcare enrollment along the lines of socioeconomic status, race, and geographical location. This research study presents the findings of a qualitative, interview-based study that explored what maternal primary caregivers were influenced by when they enrolled children of color in high-poverty urban childcare centers. Building upon the current literature, the study explores the ways structural, parental, and child-level factors intersected in the decision-making process and how choices continued to effect parents after initial enrollment decisions had been made. This study also addresses parental satisfaction levels. Through a series of interviews conducted with the maternal primary caregivers of children enrolled in one of three early childhood centers in a single metropolitan region, this study captures and describes childcare enrollment as a complex and nuanced process. The findings of the study speak to the nature of navigating and managing childcare decisions from the perspective of the parent. Specifically, the study found that networks of trust, maternal instincts, and lessons learned from past childcare experiences influenced the choices of the maternal primary caregivers interviewed. Educational value and children's futures were also important, as were logistics and cost. As the mothers in the study made their choices, they also negotiated structural, parental, and child factors. The literature supports these factors as influencing choice, but they have largely been examined in isolation. This study adds to the literature by describing how levels of factors intersected and overlapped with one another. More exploratory findings of the study support that maternal primary caregivers continued to manage their childcare choices long after enrollment and that childcare satisfaction is both subjective and nuanced. The experiences of the women who participated in this study shed light upon directions for future research and areas of need in terms of resources, information, and support. The mothers in this study made childcare choices based on their realties, using who or what they knew and how they felt. Further, the local governance where this study was conducted proved highly disjointed and participants showed little faith in the system. The greatest area of need, which would stand to most benefit all parents, is for meaningful increases in support, resources, and cohesion at the local level.