CARBONIC ANHYDRASE MODULATORS FOR DETECTION AND TREATMENT OF HUMAN DISEASES 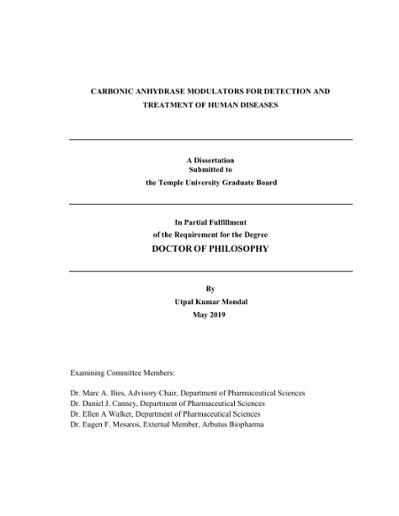 Carbonic anhydrases (CAs, EC 4.2.1.1) are a class of metalloenzymes that catalyze the hydration of CO2 under physiologic conditions and are involved in many physiological and pathological processes. Modulation of CA activity, particularly CA inhibition is exploited pharmacologically for the treatment of many diseases such as cancer, glaucoma, edemas, mountain sickness. CA activation has been less frequently investigated till recently. Genetic deficiencies of several CA isozymes are reported in the literature and reflect the important role of carbonic anhydrases in human physiology and homeostasis. Activation of CA isozymes in brain have been correlated recently with spatial learning and memory. Based on these premises, activators of CA isozymes have the potential to alleviate mild dementias and to act as potential nootropic agents. In chapter 3, continuing our long-term interests towards the development of potent and selective CAAs, we carried out X-ray crystallographic studies with a small series of pyridinium histamine derivatives, previously developed as CAAs by our group. This study revealed important insights into the binding of this class of activators into the active site of CA II isozyme. A potent pyridinium histamine CAA 25i was successfully crystallized with CA II isozyme and was found to bind into the hydrophobic region of the active site, with two binding conformations being observed. This is one of the very few X-ray crystal structures of a CAA available. Based on the findings of this X-ray crystallographic study and building on our previously developed ethylene bis-imidazole CAAs, we advanced a novel series of lipophilic bis-imidazoles. Enzymatic assays carried out on purified human CA isozymes revealed several low nanomolar potent activators against various brain-relevant CA isozymes. Bis-imidazole 30e was found to be a nanomolar potent activator for CA IV, CA VA and CA IX. Due to their conjugated structure, these CAAs were also fluorescent and therefore were fully characterized in terms of photophysical properties, with several representatives proving to display very good fluorophores. The very good activation profile against several different CA isozymes, along with excellent fluorescence properties recommend these compounds as great molecular tools for elucidation of role of CA isozymes in brain physiology, as well as towards improvement of memory and learning. Focusing on inhibition of CA isozymes, it must be stressed that over the last decade a clear connection had been established between the expression of CA IX and CA XII and cancer. Since cancer is the second most common cause of death in the world, we explored the possibility to kill cancer cells via inhibition of different CA isozymes present in cancer cells. The membrane bound carbonic anhydrase IX (CA IX) isozyme represents a particularly interesting anticancer target as it is significantly overexpressed in many solid tumors as compared to normal tissues. In malign tissues this CA isozyme was found to play important role in pH homeostasis and promotes tumor cell survival, progression and metastasis. Thus, CA IX represents a potential biomarker and an appealing therapeutic target for the detection and treatment of cancer. CA IX can be targeted either through the development of small or large molecular weight, potent, and selective inhibitors or through the development of CA IX targeted drug delivery systems for selective delivery of potent chemotherapeutic agents. Building on these premises, in this dissertation, we also revealed our continuing efforts towards the development of potent and selective CA IX inhibitors along with their translation into the development of CA IX targeted drug delivery systems. In chapter 4, we designed a series of small molecular weight (MW) ureido 1,3,4-thiadiazole sulfonamide derivatives employing the “tail approach”, through the decoration of established sulfonamide CA inhibitor warheads with different tail moieties via ureido linker. The generated CAIs were tested against tumor associated CA IX and CA XII isozymes and off-target cytosolic isozymes CA I and CA II, and were revealed to be moderate to highly selective and nanomolar, even sub-nanomolar, potent CA IX inhibitors. Several potent pan-inhibitors were also identified in this section. We assessed these CAIs for their in vitro cell killing ability using MDA-MB 231 breast cancer cell line expressing CA IX and CA XII. The most efficient CAI proved to be ureido-1,3,4-thiadiazole-2-sulfonamide 69, which showed subnanomolar potency against purified human CA IX and CA XII isozymes, with good selectivity against CA I and CA II, and consistent, statistically significant cancer cell killing. In Chapter 5, continuing our efforts towards the development of potent and selective CA IX inhibitors, we designed, synthesized, characterized and evaluated a new series of PEGylated 1,3,4-thiadiazole-2-sulfonamide CAIs, bearing different PEG backbone length. We increased the PEG size from 1K to 20K, in order to better understand the impact of the PEG linker length on the in vitro cell killing ability against CA IX expressing cancer cell lines and also against a CA IX negative cell line. In vitro cell viability assays revealed the optimum PEG linker length for this type of bifunctional bis-sulfonamide CAIs in killing the tumor cells. The most efficient PEGylated CAI was found to bis-sulfonamide DTP1K 91, which showed consistent and significant cancer cell killing at concentrations of 10−100 μM across different CA IX and CA XII expressing cancer cell lines. DTP1K 91 did not affect the cell viability of CA IX negative NCI-H23 tumor cells, thus revealing a CA IX mediated cell killing for these inhibitors. In chapter 6, we decided to further explore the possibility of using CA IX as a targeting epitome for the development of a gold nanoparticle-based drug delivery system. We translated the oligoEG- and PEGylated CAI conjugates into efficient targeting ligands for gold nanoparticle decoration along with chemotherapeutic agent doxorubicin (Dox), in a novel multi-ligand gold nanoplatform designed to selectively release the drug intracellularly, in order to enhance the selective tumor drug uptake and tumor killing. We were successful in developing compatible CAI- and Dox- ligands for efficient dual functionalization of gold nanoparticles. Our optimized, CA IX targeted gold nanoplatform was found to be very efficient towards killing HT-29 tumor cells especially under hypoxic conditions, reducing the hypoxia-induced chemoresistance, thus confirmed the potentiating role of CA IX as a targeting epitome.