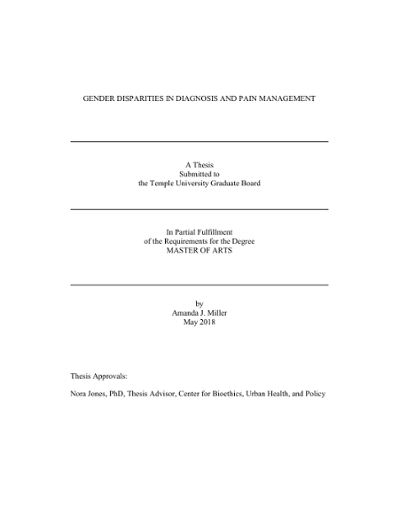 The proliferation of social media and other online forums has allowed female patients to share their experiences in the healthcare system. Female patients and women’s health advocates can more easily speak out about instances of gender bias in medicine, which impact women’s access to equitable healthcare and positive healthcare experiences. Although there are some medical studies addressing gender disparities in various aspects of medicine, the impacts of gender bias on healthcare remain understudied and poorly understood. Patient narratives therefore provide an essential insight into the state of gender bias in medicine today. This paper aims to explore these narratives for common themes, to determine whether the current medical literature supports the presence of gender-based disparities, and to highlight the biological, psychological, and sociocultural factors impacting any disparities. Patient narratives frequently cite frustrations with diagnostic errors or delays and inadequate pain management, and the medical literature generally supports women’s accounts of gender disparities in these areas. Several studies of diagnostic disparities show that women more frequently experience delays in diagnosis, missed diagnoses, and incorrect psychiatric diagnoses. Multiple pain management studies have found that women face longer delays in care, lower rates of analgesic administration (particularly opiates), and fewer referrals for nonpharmacologic management strategies. Explanations for these disparities are likely multifactorial, and include provider ignorance of female-specific presentations and diseases, prevalence of understudied diseases in women, misattribution of symptoms to psychogenic causes, communication differences, normalization of female pain, and misconceptions about pain tolerance.