HOW DO TEACHERS IN A MID-ATLANTIC SUBURBAN SCHOOL DISTRICT USE TECHNOLOGY TO INTERACTIVELY ENGAGE THEIR STUDENTS? 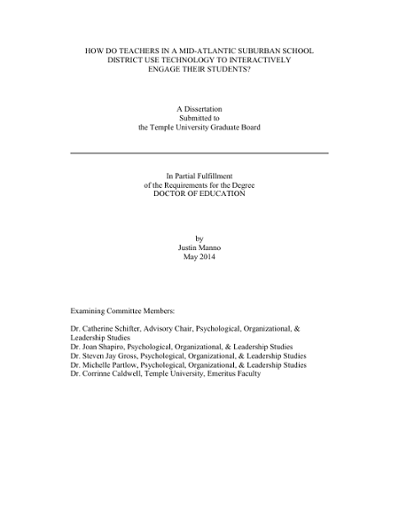 Interactive whiteboards have become an emergent technology in K-12 education in the United States as well as other countries throughout the world (Johnson & Türel, 2012). There have been studies conducted on the perceived effectiveness of the SMART Board® (Beauchamp & Prakinson, 2005; Brown, 2004; Dolan, 2010; Erduran & Tataroðlu, 2010; Hennessy, Deaney, Ruthven, & Winterbottom, 2007; Johnson & Türel, 2012; Jones, 2004; Manzo, 2010; Marzano & Haystead, 2009; Şad, 2012; Saltan & Arslan, 2009; Schachter, 2011; Smith, Higgins, Wall, & Miller, 2005; Türel, 2011; Wood & Ashfield, 2008). There has also been a study on the correlation between the SMART Board and student achievement (Marzano & Haystead, 2009). The purpose of this qualitative case study was to observe the methods that teachers, who are above proficient with technology, use to integrate the SMART Board® into their daily lessons and interactively engage the students. A descriptive case study was conducted on four different teachers from four different elementary schools in a suburban mid-Atlantic school district in the United States. One teacher from grades second through fifth was observed. The use of multiple-cases helped strengthen the conclusions of the study (Yin, 2009). The data was collected through pre-observation and post-observation interviews with the teachers, a triple-journal written by the researcher, a parent questionnaire, and a student questionnaire. All of this data contributed to the conclusion that these teachers were in fact above proficient users of the SMART Board®, who would fall into Rogers (2003) adopter categories of innovator and early adopter. They also adopted at an appropriation level where they have successfully integrated a new technology into all daily activities (Whitehead, Jensen, & Boschee, 2003). The study found that the SMART Board® was perceived to be effective by the parents, teachers, and students from these schools in this one school district. 92% of the parents who responded to the parent questionnaire noted using a SMART Board® is beneficial to their child's education. All four teachers reflected in the post conference that the SMART Board® helped the students understand the concept of each observed lesson better than had they not used a SMART Board®. 81% of the students responded that they would remember these lessons better because the SMART Board® was used. These four teachers demonstrated skillful pedagogy with integrating the SMART Board® into their daily lessons. They used many different media and many different methods to interactively engage their students with the content. A major question that arose from the research was the definition of interactive. Is physical interaction with the SMART Board® required to cognitively interact with the content of the lesson?