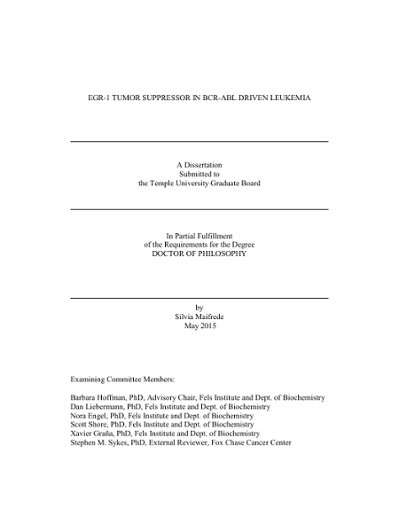 Chronic Myelogenous Leukemia (CML) is a hematological disease originated with a chromosomal translocation t(9;22)(q34;q11) in a pluripotent hematopoietic stem cell. CML typically evolves in 3 different clinical phases: chronic and accelerated phases, and blast crisis. Disease progression is associated with the acquisition of secondary mutations that can be of very diverse origins, including inactivation of tumor suppressor genes, as well as inhibition of differentiation, DNA repair and telomere maintenance. While current therapies are very often successful, the remaining issues of resistance and the fact that therapy will not cure CML make it important that new therapy capable of effectively curing it be developed. The early growth response-1 (Egr-1) gene is a zinc-finger transcription factor localized to the human chromosome 5. Egr-1 belongs to a family of early response genes whose expression is rapidly stimulated by growth factors, hormones and neurotransmitters. In addition, Egr-1 is a myeloid differentiation primary response (MYD) gene, and is a positive regulator of terminal myeloid differentiation that potentiates macrophage differentiation. It also has been shown that Egr-1 plays a role in the development, growth control and survival of several cell types, such as T cells, B cells, and neuronal cells in addition to myeloid cells. There is a large amount of evidence consistent with Egr-1 behaving as a tumor suppressor in hematopoietic cells, both in vivo & in vitro, in both humans & mice, making it a prime candidate for a role in CML. In this study we asked if Egr-1 would behave as a tumor suppressor in CML. To answer that we investigated the function of Egr-1 in BCR-ABL driven leukemia using a mouse m bone marrow transplantation (BMT) model. We observe that loss of Egr-1 accelerates the onset of BCR-ABL driven CML. Furthermore, through Facs analysis we showed that most animals developed myeloid leukemia, determined by the observation that the majority of GFP+ cells in the BM were positive for Gr-1 and negative for B220. Interestingly a small cohort of mice developed B-cell acute lymphoid leukemia (B-ALL); this included both WT BCR-ABL and Egr-1 KO BCR-ABL BM-transplanted groups. In addition, we demonstrated that the loss of Egr-1 caused a more aggressive leukemia, which resulted not only in more rapid onset of disease but also greater enlargement of spleen and liver, as well as a tendency to more aggressive lung infiltration of leukemic cells. We also showed that decreased apoptosis, increased proliferation rates and resulting increased viability are consistent with, and probably contribute to, the increased leukemic potential of Egr-1 KO BCR-ABL BM. In addition, we demonstrated that Egr-1 expression was downregulated in BCR-ABL expressing BM cells in vitro, and in spleens of transplanted leukemic mice. Moreover, a very interesting observation, consistent with the rapid onset and aggression of disease, was that the bone marrow of leukemic mice caused by Egr-1 KO BCR-ABL BM transplantation, were enriched with lineage negative BCR-ABL-expressing cells, significantly more so than what was observed in WT BCR-ABL-transplanted mice. That this is also an enrichment of leukemia initiating cells was demonstrated using bone marrow from primary transplantation in a secondary bone marrow transplantation assay. Furthermore, using serial replating assays of colony forming units (CFUs), it was demonstrated that Egr-1 KO BCR-ABL-expressing BM had higher self-renewal ability than WT BCR-ABL-expressing BM, exhibiting an enrichment of primitive stem cells and fewer differentiated cells relative to WT counterparts. Finally, we also analyzed expression of Egr-1 in samples of CML human patients; the results are intriguing but due to small sample size inconclusive. Further inquiry on Egr-1 in CML, including expanding the study of human CML, signaling analysis, interaction of Egr gene family members in leukemia, and gain of function experiments should identify novel players that can impact on the aggressiveness of the disease, predict outcome for currently established therapies, as well identify targets for treatment regimens or adjunct therapy. In addition, these studies can provide a paradigm for understanding how Egr-1 functions as a tumor suppressor for other cancers and types of leukemia, and also delineate pathways that can be activated/inhibited by drugs, including reactivating Egr-1 expression.