Helping Coaches Help Themselves: The Impact of The Mindfulness Training for Coaches (MTC) Program on Coaching, Stress, and Emotion Management 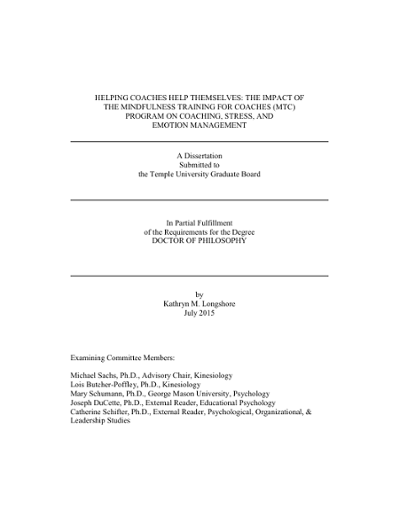 Researchers and consultants alike agree that coaching is a stressful job and coaches are not well-equipped to handle the stress (Frey, 2007; Giges et al., 2004). Furthermore, coaches themselves admit they are not always able to shield their athletes from their stress and may even transfer it to their athletes (Olusoga et al., 2010). Mindfulness training has been shown to increase well-being, namely by reducing stress and burnout, while increasing emotional regulation, attention, and satisfaction, among other benefits (Baer, 2003; Chiesa & Serretti, 2009). The Mindfulness Training for Coaches (MTC) program has shown promise as an intervention to increase well-being and reduce stress in coaches (Longshore & Sachs, 2015). The current study aimed to replicate the positive impacts on well-being of the MTC as well as determine if athletes of MTC-trained coaches also benefit. Sixteen Division I and III collegiate coaches attended an initial MTC training session, with eight coaches going on to complete the program. Pre- and Post- measures of mindfulness, emotion regulation, coaching issues, and coaching behavior were taken at the start and end of training. State measures of stress, sport emotion, and mindfulness were taken bi-weekly. Coaches who completed the training were also interviewed about their experiences following the training, while those who dropped out completed a follow-up survey. Thirty-four DI and III athletes completed pre-test measures of satisfaction, burnout, and coaching behavior, with 11 responding at post-test. Repeated-measures ANOVAs were conducted and results showed that coaches who completed the MTC had significantly improved trait emotion regulation, while also reporting generally stable emotions, improved curiosity and decentering, and significantly less perceived stress throughout the training. In contrast, sport mindfulness, coaching issues stress, and coaching behaviors did not see significant change. Interviews revealed two categories (Program Process and Program Experience), four concepts (Motivation and adherence, Mechanics, Outcomes, Impacts) and multiple themes for each concept. Coaches who dropped out after the initial session did not significantly differ from completed training coaches at the start of the MTC. Follow-up surveys revealed one category (Program Involvement) with three concepts (Motivation and adherence, Mechanics, and Experience) and multiple themes. Limitations, including small sample size and lack of a control group, were discussed, along with recommendations for researchers and practitioners, as well as future directions. The current study suggests that the MTC program is an effective intervention to help coaches manage their emotions, reduce stress, and positively impact their coaching and life.